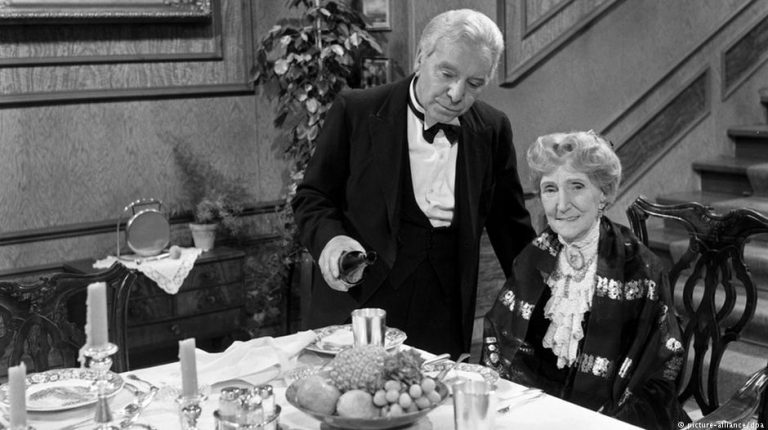 The sketch with British stars started out in English music halls. Its filmed version holds the Guinness World Record for the most repeated TV program. But the classic has never aired on British television — until now.It's a sketch that's totally unknown in the English-speaking world, despite its origins in British music halls.

In Germany, as well as in different European countries, it has cult status. In a bid to make casual conversation, a German might ask "Same procedure as last year?" referring to the film's most famous line. But English-speaking visitors to Germany will be simply confused by continual references to this obscure sketch.

The "most British" German film had never been shown in a British cinema until November, when it got its UK premiere at a comedy film festival in Campbeltown, Scotland, as part of the Scottish Comedy Film Festival's Slapstick Weekend.

Millions of Germans take part in this New Year's Eve ritual: watching a black-and-white English-language television sketch called Dinner for One, or the 90th Birthday that was recorded in 1963. Every year it is screened, usually several times, by most of Germany's regional public TV channels. Despite being in English, it is broadcast without subtitles.

The 18-minute slapstick sketch, acted by Freddie Frinton and May Warden, has become the highest-rated TV show in German history, and holds the Guinness World Record for the most repeated television program ever.

The skit has been parodied hundreds of times, whether as a reenactment using Lego bricks, a Norwegian punk version or a German-Turkish one, called Döner for One.

A 2011 version called Euros for No One features a digital version of German chancellor Angela Merkel and then French president Nicolas Sarkozy, about the Eurozone debt crisis.

In 2016, Netflix released its own parody to promote its shows; the absent guests of the elderly woman who is celebrating her 90th birthday in the skit are Frank Underwood (House of Cards), Pablo Escobar (Narcos), Saul Goodman (Better Call Saul) and Crazy Eyes (Orange Is The New Black).

Anyone who didn't grow up with the tradition might find it difficult to understand why this particular sketch became so popular. Its slapstick style is meanwhile outdated and the whole structure is, by today's standards, simple and repetitive. But nostalgia is, by definition, wanting to repeat and return to something that's outdated, in an idealized, simplified version — which makes the sketch a perfect candidate for a reassuring end-of-year ritual.

Ahead of the UK cinema premiere, the son of comedian Fred Frinton offered his explanation for the German tradition: "I think they see it as quintessentially English," Mike Frinton told the Scottish newspaper The Herald. "Here's this old lady hanging on to her colonial friends, and it's almost become like the Queen's speech. Just as you can't get on with Christmas Day without watching that [in the UK], in Germany you can't get on with New Year's Eve without seeing Dinner for One."

Written by author Lauri Wylie in the 1920s, the Dinner for One sketch was originally performed in British music halls. Actor Freddie Frinton began to play James in 1954, and shortly thereafter May Warden took over the role of Miss Sophie, previously portrayed by her daughter Audrey.

In the early 1960s, German television producer Peter Frankenfeld and director Heinz Dunkhase saw Dinner for One in Blackpool and invited Frinton and Warden to fly back to Hamburg to record the sketch, using the relatively new technology of videotape, for a one-time broadcast in 1963.

Studio employees and in-house secretaries served as the live audience for the sketch about a butler who gets riotously drunk while serving food and drinks to his employer and her imaginary guests on her 90th birthday.

The running joke is that Sophie sits alone at the table because she has outlived all her male guests, who were her former lovers; the last was buried 25 years earlier. Butler James assumes the role of each "guest" to toast Miss Sophie with champagne, wine, port and so on throughout the meal. Before each toast, he asks plaintively: "Same procedure as last year, Miss Sophie?" to which she replies, "The same procedure as every year, James."

That line, "Same procedure as every year," (in the original English) has become a popular catchphrase in Germany.

It is repeated one final time after dinner as butler James escorts Miss Sophie upstairs to bed, with Frinton leering knowingly at the audience and affirming, "I'll do my very best!"

In its first decade, the sketch was replayed only sporadically on German television. It was used as a New Year's Eve filler on the public television station NDR in Hamburg in 1972 and then quickly became a regular part of German New Year's Eve celebrations. The plot of the sketch has nothing to do with New Year's Eve.

Over the years, it became a cult classic in Germany — to the extent that it is shown on dozens of regional channels at some point over New Year and NDR shows it six or seven times during New Year's Eve, including a colorized version.

NDR recorded several different versions of the sketch, but the best-known is the 18-minute version, shot in a single take, with an introduction, or explanation, in German by announcer Heinz Piper. Swiss television invited Frinton and Warden to record its own, shorter, version of the sketch, which has also been broadcast for years on New Year's Eve.

The popularity of Dinner for One has also spread to other countries, particularly Scandinavia, where it has also become an end-of-year tradition. It was even shown on East German television, beginning in 1988.

A silly moment of merriment

Frinton was a master at playing comic drunks and had a huge following on British television in the 1950s. His career was in a lull when he taped the German version of his popular sketch. He died of a heart attack at 59 in 1968, before the many reruns of the sketch made him a household name in Germany.

Warden died 10 years later, three years before what would have been her own 90th birthday.