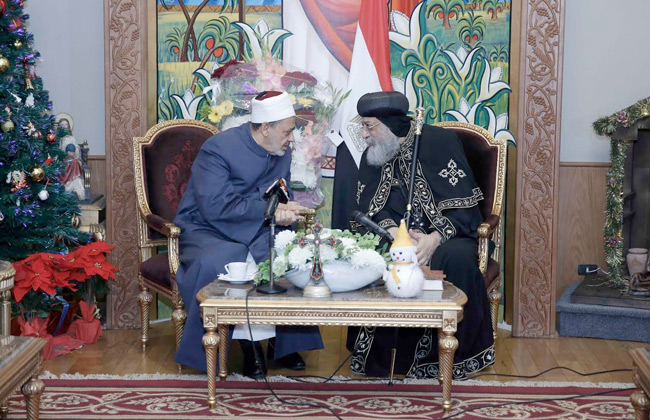 Al-Tayeb also congratulated Pope Tawadros II for the opening of the new headquarters of the Cathedral in the New Administrative Capital.

Muslims can greet and exchange gifts with non-Muslims during their religious celebrations, according to the religious edict published on the Facebook page of the Al Azhar Fatwa Global Centre of Egypt’s Al-Azhar. The edict came in response to an inquiry on the rule of Islam on greeting Christians during their festivals. This was an official edict by the top Islamic religious institution in Egypt in favour of greeting Copts on Christmas.

The centre explained that tolerance and coexistence between Muslims and Christians, and congratulating each other during holidays, weddings, and social events, is not only acceptable but “desirable.”

Several extreme clerics have previously said that Muslims should not greet Christians on religious or social occasions.

A lawsuit was filed against the Deputy Head of the Salafist Front in Alexandria, Yasser Borhami, accusing him of fomenting a sectarian strife and incitement against the Copts of Egypt through posting an edict on his official Facebook account which prohibited Muslims from greeting Copts on their holidays, describing it as “worse than drinking alcohol and committing adultery.”