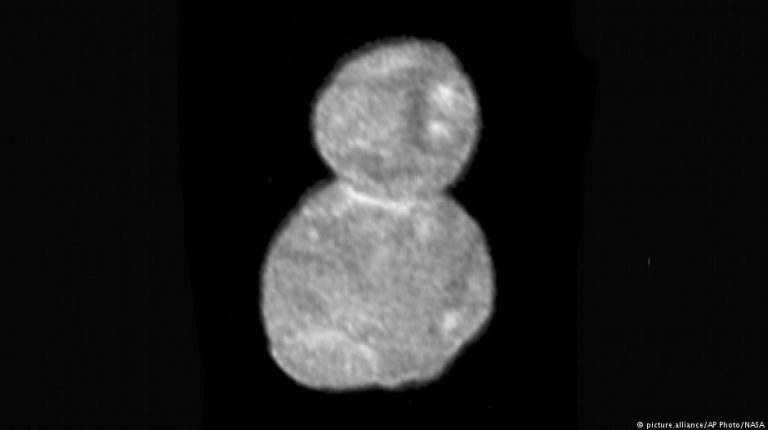 Scientists at NASA have revealed details of the icy minor planet at the edge of the solar system known as Ultima Thule. The New Horizons probe sent back images that show the frosty object is shaped like a snowman.New Horizons scientists on Wednesday released photos of the most distant object ever reached by a space probe, revealing it had the form of a snowman.

Detailed images beamed back from the New Horizons spacecraft showed that Ultima Thule, which lies some 6.4 billion kilometers (4 billion miles) away from Earth, is composed of two spheres, or "lobes."

New Horizons conducted its successful flyby of Ultima Thule, which is classed as a minor planet, on Tuesday. Before that, scientists only had a blurry image of the body and thought it was composed of two more elongated parts — resembling something more like a peanut or bowling pin.

"That image is so 2018," said lead researcher Alan Stern. "The bowling pin is gone – it's a snowman if anything at all."

Read more: Houston, we have a problem!

As well as being the most distant object reached, Ultima Thule may be the oldest celestial object to be studied by a spacecraft. The body likely formed as early as 99 percent of the way back to the formation of the solar system.

Researchers say that the so-called "contact binary" could help yield clues about how other planets formed.

"What we'll very soon learn about this primordial building block of our solar system will exponentially expand our knowledge of this relatively unknown third region of space," Stern said.

Researchers believe the spheres were formed from two rotating clouds of smaller chunks of ice and pebbles that coalesced. The two objects were slowly pulled together by gravity, creating the "bilobed” object with a distinct "neck."

The two objects came together at an "extremely slow speed," according to mission geology manager Jeff Moore. The lobes, he said, were really only "resting on each other."

Ultima Thule is about 33 kilometers long (21 miles) and is located in the Kuiper Belt, a "twilight zone" of small icy and rocky objects that lies beyond Neptune and is only faintly illuminated by the sun.

In 2015, New Horizons encountered the dwarf planet Pluto, also part of the Kuiper Belt but a billion miles closer to Earth. It found the planet to be slightly larger than previously thought. Last year, a study of images gathered by New Horizons revealed methane-rich dunes on Pluto's icy surface.