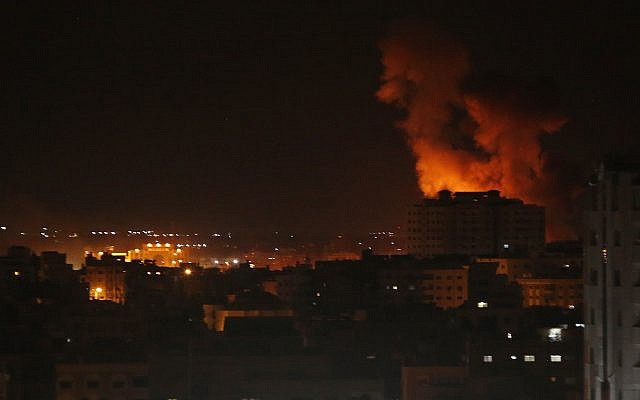 Israel launched several strikes on Sunday overnight against Hamas targets in Gaza, in response to a rocket fired from the Strip according to the Israeli force.

Israeli forces said that their “fighter jets and a helicopter targeted a number of terror targets within Hamas’s military camp in northern Gaza.”

No casualties or injuries from both sides have been reported.

Israel’s Iron Dome system identified and intercepted a rocket launched from Gaza into Israel and sounded near the southern city of Ashkelon, the Israeli forces said. However, Hamas did not claim responsibility for rockets launched from Gaza.

During the past year, Israel and Gaza’s factions exchanged heavy fires leading to injuring and the killing of dozens including Hamas members.

In May 2018, both exchanged fire in the heaviest flare-up since the 2014 Gaza war, after Gaza’s factions fired over 50 rockets and mortars into southern Israel.

Separately, Israeli Prime Minister Benjamin Netanyahu on Sunday called on the US to officially recognise Israeli sovereignty over the Golan Heights, which Israel captured during the 1967 war.

Netanyahu’s remarks came during a joint press conference with the US National Security Advisor, John Bolton, during the latter’s visit to Israel.

Bolton also raised the issue of the US withdrawal from Syria, and said that there is no timeline for pulling out till now, asserting that American soldiers will not leave the civil war-torn country until Turkey assures safety for Kurdish fighters.

In Syria, Israel launched dozens of strikes against Iranian and Hezbollah weapons depots, the Syrian army usually reported. The latest airstrikes were last December, resulting in injuring several senior Hezbollah officials according to US officials. Israel rarely confirms such strikes.

Last October, Israel said its air force hit about 80 targets in Gaza, including a four-storey building used by Hamas as a headquarters.

Overnight, air raid sirens were heard in southern Israel as ten of the incoming rockets were intercepted by the Iron Dome rocket defense system, two landed before they reached their targets and the rest fell in open areas.

Islamic Jihad, a smaller group which sometimes acts independently of Hamas, appeared to claim responsibility for the rocket fire.

Israel holds Hamas responsible for any fire that comes from Gaza.

It was the biggest rocket attacks since August 2018 came after, and despite talk of progress in easing Israel’s crippling 11-year blockade. Following Egyptian mediation, authorities in Gaza and Israel had previously called a ceasefire.

Egyptian security officials have been talking separately to Israeli and Palestinian leaders in an attempt to restore calm along the border.

Palestinians have been protesting along the border since March 30, 2018, demanding an end to Israel’s blockade of the territory and the right to return to lands from which they either fled or were driven from when Israel was founded in 1948. More than 200 Palestinians have been killed and thousands injured by Israeli forces during the Gaza protests in the past seven months, according to the enclave’s health ministry. One Israeli soldier has been killed.

In November 2018, Israeli forces and Palestinian militants exchanged fire  in an Israeli operation in the Gaza Strip, leaving six Hamas militants and one Israeli soldier dead.

Hamas said that an Israeli commando unit entered three kilometers  into the strip near Khan Yunis in a civilian vehicle and shot dead Nour Baraka, the deputy commander of Hamas’ military wing, the Qassam Brigade.