Each time she closes her eyes, she imagines and sees patterns and illuminating precious materials. Her moves are often calculated by the most minimal units of measurements, as her details are always eloquently intricate. Between art and timeless expression, she plans to spread beauty whether in the east or the west. 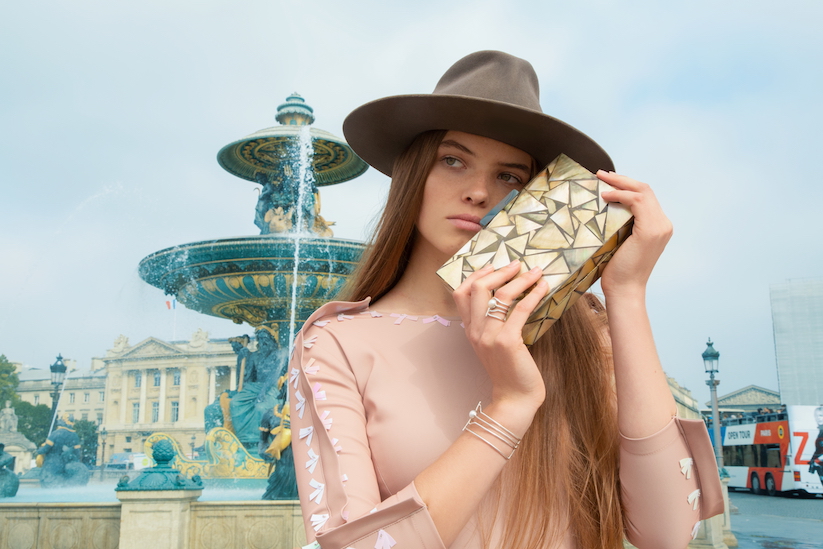 Dina El Sheikh is a designer by nature. However, her road towards becoming a bag designer was in fact paved by various experiments. Her eye for meticulous details has positioned her as a prominent name in a rapidly growing industry. Through her brand, S.A.D.A.F.A, the designer has managed to not only create collectable art pieces, but, she has also managed to subtly and effectively empower one of Egypt’s time tested crafts.

El Sheikh believes that her earliest start was inspired by nothing other than her natural interest in arts and crafts as well as her family’s creative flair. With a degree in theatre, a specialisation in costume design and a minor in art, El Sheikh left her years at the American University in Cairo with a versatile set of skills and knowledge. However, her educational journey only accelerated after studying at Istituto Di Moda Burgo in Milano, and later Azza Fahmy’s design studion by in Cairo. “It was only natural for me to try to express myself through design.” El Sheikh added “I had spent a few years working in the field of styling and fashion consultancy.”

Even though she has never imagined herself designing bags, her design-fuelled experiments-ranging from sewing, pattern making, or even creating jewellery-has led her to an unexpected fate. Her lucky trail of coincidences started in 2013, when she picked up the hobby of street photography. “I have always been on a quest to discover new places, but more importantly, I wanted to get closely acquainted with my city, roaming old alleys, trespassing deserted mansions, and entering rundown buildings,” said the artist passionately.

Her quick chitchats with strangers as well as her interest in non-traditional venues, rapidly and regularly introduced her to friendly faces and opened her eyes to many hidden gems. According to El Sheikh, Egyptians by nature are very talented and masters in artistries. Yet, they tend to forget these facts about themselves. Saddened that ready-made commodities have already controlled the centre of attention and consumed the majority of local customers, the designer was suddenly inspired to bring back to the spot light the preciousness of handmade art.

“I guess what actually pushed me into designing bags, is that it gave me a chance to combine all my interests and educational background together in one field.” Said El Sheikh, adding “I spend my days roaming the streets, taking pictures, talking to friendly strangers, digging for gemstones, and even sewing pouches for my bags. Somehow, everything synced in together and merged into a single design.”

Aside from her picturesque designs, which instantly standout amidst any given crowd, S.A.D.A.F.A is also quite distinguishable due to the designer’s choice of materials. Far from traditional options such as leather or even brass, El Sheikh favours mother of pearl and abalone. According to her, both materials are romantic mediums to work with.

“Their colours are very vivid, iridescent, and ever so versatile. There is a magic to them in how they capture and reflect light. I personally find them just as precious as diamonds, but they have not gained the same attention or propaganda,” described El Sheikh with a fond twinkle in her eyes.

With that said, the designer’s main goal behind S.A.D.A.F.A is to revive longstanding Egyptian craftsmanship and techniques by adding a contemporary twist to a long forgotten craft. According to the designer, she aims to flaunt her personal pride in Egyptian handmade skills as well as honour the fact that Egyptian hands delicately craft every single piece.

In parallel, as a master of many trades, everything around her is an inspiration. All the traveling and living abroad as a child has taught her to appreciate diverse cultures and surroundings. “I find it fascinating, how people react differently to their environments, especially in how they dress, and how they choose to carry themselves,” said El Sheikh.

Moreover, nature on the other hand is one of her constant sources of inspiration. As a firm believer that rich resources are everywhere around those who choose to notice, she advocates the need to simply be more observant and attentive to the planet.

For her latest collection, the designer decided to delve into her own childhood memories and revisit the African beauty, Cote d’Ivoire. “Although I have lived there for only two years (1988-1990), it has shaped a great deal of my personality. It was a completely different lifestyle for me, such a rich culture and fascinating people,” explained El Sheikh, who still has a soft spot for the country.

With a reminiscent approach in mind, the designer still perceives Cote d’Ivoire as the land of her beautiful childhood dreams, and the closest she could get to Alice living in Wonderland.

Aside from her personal admiration for the country, this collection was rather another experiment for the designer. According to El Sheikh, she was very curious to play around with different patterns and colours of abalone shells. In addition, tribal patterns kept on popping in her head, hence taking hold of the collection. “It finally ended with the concept of using earthly tones for the clutches, but, with a touch of vibrant colours through the bag’s agate closure,” elaborated the designer.

When asked about where she would like to spot this particular collection, El Sheikh shared that her greatest source of pleasure is seeing different women wearing S.A.D.A.F.A., be it an accomplished public figure, or a young teenage girl. “I always like to remind people that this brand is very close to the heart, I like them to wear my clutches as a form of self-expression, and they are capable of dress in anytime and anywhere,” said the designer with a confident smile.

As for what the future still holds for the designer and the brand, El Sheikh prefers to take things one step at a time as she rather enjoys the journey.

In the interim, she is far from done with experimenting. The designer already looks forward to exploring with other brand domains.