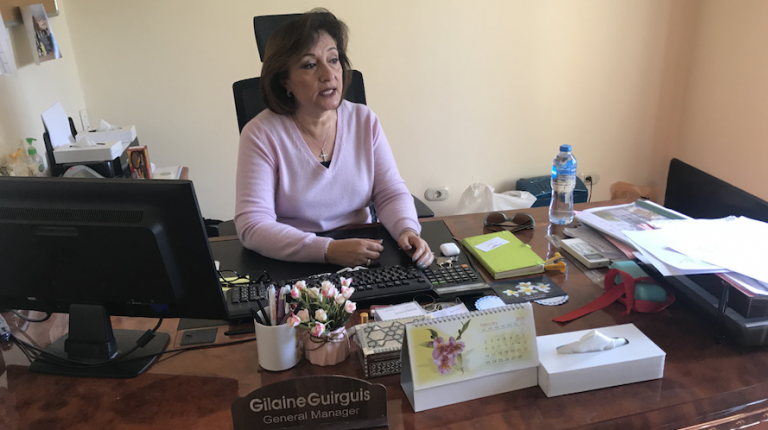 Despite Egypt being one of the best destinations for tourists worldwide, and known for having the most attractive locations, tourism has declined for a long period, but with the government’s and the private sector’s incentives, Egyptian tourism has witnessed a major boost during 2018.

Marketing the sector was one of the challenges listed on top of the government’s work agenda for the past years. Reviewing the prices strategy, opening new markets, development, as well as improving the security conditions, were the main factors which helped the return of tourism after two years of unstable conditions, following the crash of the Russian airplane in 2015.

Daily News Egypt interviewed the General Manager of Hilton Hurghada Resort, Gilaine Guirguis, one of the leading figures in the tourism sector who has worked in it for almost 37 years. During our interview, she introduced the hotel’s renovation plan, which is to be fully executed during the upcoming few years, and explained how the hotel worked on flourishing tourism with the government’s help during the time of crisis.

To begin with, will you give us a brief on the current situation of the tourism in Hurghada, compared with the past years?

Tourism has really improved much during the past two years all over Egypt. The foreign tourist is willing to fly to Egypt for a stay, however tourists became more selective than before.

After the 2015 incident, Hurghada’s tourism sector was negatively affected, as the Russian tourists were the main market feeders. Accordingly, both hotels and travel agents started to look for alternative markets in order to recover from this decline, while depending on the domestic tourism.

In 2017, slight changes began to appear on the ground, especially after the flow of the Chinese market to Egypt. Chinese tourists like to visit Egypt in groups for five-nights tours divided between Hurghada and Luxor. This is in addition to the flow of tourists from specific European countries like the UK and Germany to Hurghada, instead of Sharm El-Sheikh due to flight suspensions. Currently, we can see that the occupancy rates and the number of flights are increasing in Hurghada.

The improvement of occupancy rates encourages many hotel owners to invest in building new hotels and extending the total number of guest rooms in Hurghada, which is an indicator prooving that tourism is actually doing well.

What was Hilton Hurghada’s role in promoting tourism?

First, let us note that the Russian tourist was the main one contributing to the Egyptian tourism market until 2016. Accordingly, we started to collaborate with travel agents to explore new markets and search for alternative tourists to visit the country.

We prepared a strategic sales plan to increase the current flow of tourists from the UK, Germany, and Lebanon in parallel with penetrating new markets such as Belgium, India, China, Armenia, Kazakhstan, and more notably France.

Some of those markets have specific requirements in order to come and stay with us. For example, the Indian market requires an Indian chef to accompany tourists in order to cook their meals and recipes. After we looked into this request, we succeeded to execute the business deal once we dedicated a separate kitchen and obtained the required equipment. Their feedback on the hotel’s action has been significantly positive and satisfying.

In regards to 2018 results, we haven’t announced our Q4 year-end earnings numbers yet, they are to be released in the near-term, yet occupancy rate, and total revenues have improved, compared to 2017. Moreover, Hilton Hurghada recorded great satisfaction and problem resolution scores.

Are you planning on increasing the prices during the upcoming period?

As long as we are in a high demand, reviewing the pricing strategy is essential. For instance, we are witnessing high demand during January and February, so I decided to increase the prices, and no negative feedback was witnessed.

Did the Al-Haram district incident affect the hotel’s occupancy rates during the Christmas celebrations?

We did not receive any cancellations, and I also think that the attack did not leave any impact on tourism anywhere in Egypt.

During the evening of the day of the attack, we prepared a sheet and we expected that we will start taking cancellation requests, but thankfully, no one submitted any cancellation or even any guest left the hotel.

We were so worried especially that the timing of the attack coincided with the New Year’s and Christmas celebrations, so it was definitely a high season.

How did your hotel work on its marketing strategy during the decline of tourism?

Our marketing strategy depends on two factors, the outbound marketing, which focuses on the ways to reach clients. Our dedicated sales team plans regular sales calls and visits to tour operators in Egypt and abroad. Those trips mainly aim to strengthen the business collaboration between the hotel and tour operators, and usually help in exploring new ideas and alternatives to support the business, so that we are capable of choosing the right promotions at the right time, and to the right people. We also were keen to be present in all the international travel forums and exhibitions. As for our second strategy, the inbound marketing, our focus is to boost digital marketing, and work on updating the website, keywords, content, images, online travel agencies (OTAs), as well as our social media presence.

What was a major achievement that Hilton Hurghada implemented in 2018?

Hilton was established 25 years ago, so the hotel needed some upscaling to cope with the guests’ expectations, especially that Hilton is one of the few hotel chains in Hurghada. As for my work agenda, it was important to prepare something which will meet all our new clients’ expectations.

First, we started with renovating the rooms, as they were built several years ago, and it was important to reconstruct new interiors in order to cope with modern designs.

The rooms’ renovations are planned to be finished in phases, putting into consideration that we have to avoid the guests’ interruption during their stay. This is the reason why we work in winter when the occupancy rate is lower than in summer, so that we are able to close and renovate those rooms. During the summer, hotels are fully booked, and it is not easy to lose our guests.

We already finished 80 out of 400 rooms. This phase took almost six months from January to July 2018. The rooms are now decorated with a new interior style, making them more delightful and colourful. The rooms are completely renovated including their colours, ceramics, as well as the furniture.

We are now preparing to start working on another 80 rooms during 2019, and will continue until we are finished with all the 400 rooms.

The new phase is expected to start this January, and will end by the beginning of the summer. We are planning to finish 280 front-line rooms by 2020.

Restaurants are also part of the renovation, as we are looking forward to expanding the size of the restaurants to accommodate the numbers of guests. We are expected to work on this after finalising the rooms’ refurbishment. Occupancy is mostly over 80%, so we do not want the guest to feel that the restaurant is overcrowded, and that is why we had to renew it.

Moreover, we also have another 121 rooms located in the second line of the promenade,

as they were designed in an older stage than the front-line rooms, and we will still have another four to five years for their complete renovation, and we are working on a refurbishing plan for a period of one year.

What were Hilton Hurghada’s challenges during 2018?

First, we had a big challenge in improving the food taste and quality, which made us replace the chef two times, until we succeeded in reaching the best results which we were looking for. We also conducted training courses for our chefs.

We also changed the animation team three times. In addition, we constructed the Aqua Park, which was really one of the best ideas. Most importantly, we succeeded to start our renovation plan.

We are looking to start the second phase of the room’s renovation and increase corporate business. We increased our business with big corporates such as petroleum services companies.

We also launched a plan in order to arrange weddings by the beach, something that we already started, with the first wedding held two months ago. We are coordinating with various wedding planners in Hurghada to reach out to Hurghada’s residents, letting them choose Hilton as the venue for their wedding celebrations.

Recently, people are more frequently visiting places like Sahl Hashish, Gouna, and Dahab as they are becoming mainstream destinations, do you think this has influenced tourism in Hurghada?

No. Our clients are different, and each destination has its specific market and visitors. The hotels here are different, which combine both shopping and relaxation. Clients choose places according to their needs.

How did you work on improving the employment rates?

Due to the tourism’s decline during the past three years, many employees left Hurghada to look for other jobs. Therefore, we worked on training fresh graduates in order to select the best ones. The induction-training plan takes place for 15 days before joining the hotel’s operation.

We are now very concerned with language abilities more than before, and we do not accept slang language anymore. We also targeted breadwinner females, as we train them on cooking and baking pastries, and provide them with the chance to work with us.

We already trained 10 females who send us baked desserts, and anyone who wants to learn or work, we are open to teaching them.

We also do some community work by sending some equipment and materials to charity organisations so they can use them to train children and young people who are interested in working in the tourism sector.