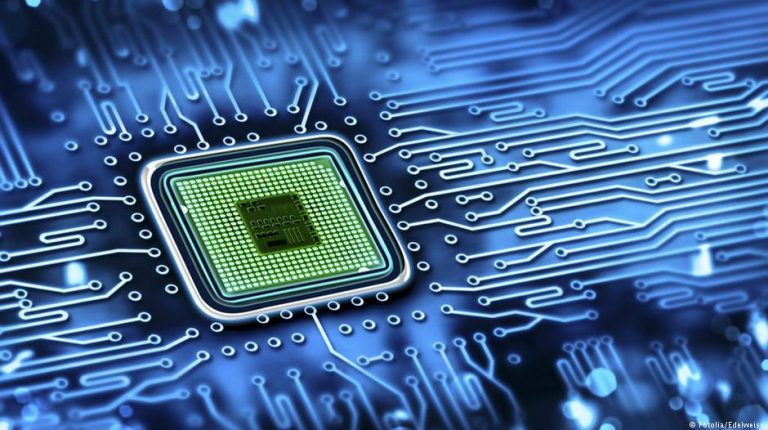 Samsung, the world’s largest chipmaker, has flagged a massive drop in earnings, blaming weaker sales and falling prices. Is the tech giant’s first profit decline in two years a harbinger of the chip boom fizzling out?Samsung's smartphones and memory chips have earned the South Korean tech giant record profits in recent years, but "mounting macro uncertainties" have forced the company to downgrade its outlook for 2019.

Lackluster demand in the memory chip business and intensifying competition in the smartphone market, said Samsung in an earnings estimate on Tuesday, had already reduced sales by 10 percent in the final quarter of 2018 and operating profit by 28.7 percent.

"Memory earnings fell significantly … due to weaker-than-expected demand amid inventory adjustments at data-center customers, which led to a greater-than-expected drop in chip prices," Samsung said.

After the surprise announcement, the South Koreans now expect earnings from its chip business, which accounts for 70 percent of its operating profits, to remain subdued in the first months of the year.

For more than six years, the world's leading chipmakers — South Korea's Samsung and SK Hynix, and Micron Technology from the United States — have enjoyed a "supercycle," moving beyond the so-called silicon cycle, in which the sector goes from boom to bust every three to five years. Operating margins have been running at 50 percent for the companies.

After hovering around $300 billion (€261 billion) until 2016, the global semiconductor market expanded 20 percent in 2017 to more than $400 billion for the first time. But market watchers such as Britain's IHS Markit and US group Gartner believe the party is coming to an end.

According to the analysts, the outlook for the three main markets of semiconductors — computers, data centers and smartphones — is negative.

Last week, US technology bellwether Apple was forced to cut its quarterly sales forecast, citing poor sales of its flagship iPhones in China amid a steeper-than-expected "economic deceleration." Samsung's chips power the handsets of most major makers, including Apple.

Stephen Innes dismissed suggestions that the Apple sales drop was merely the result of a Chinese backlash due to escalating trade tensions with the US. "These Samsung results are quite damning, suggesting there is a broader-based retail and manufacturer slowdown afoot," the head of Asia-Pacific trade at OANDA said in a note to investors.

And indeed, there are estimates indicating that 2018 could become the first year since the iPhone was introduced in 2007 that the smartphone market has contracted. Between January and September last year, global smartphone shipments fell 4 percent. A lack of technological innovation and saturated markets are expected to hold down sales to just 1.44 billion smartphones.

In addition to the smartphone slump, chipmakers' storage business is also likely to be hit by a downturn. Major IT companies, such as Google and Amazon, have spent vast sums on new data centers in recent years. They are among the biggest clients for Samsung, accounting for nearly 30 percent of demand for the company's DRAM chips last year — up from about 5 percent five years ago. Now the US data giants are focused more on internal management issues than expanding their infrastructure.

While operating rates at chip factories worldwide remain above 90 percent, according to IHS Markit, their profitability is bound to decline amid slowing demand. This supply-demand mismatch has already sent the price of flash memory, used for long-term data storage, down more than 30 percent since the start of 2018.

The same goes for DRAM chips, which provide devices with temporary workspaces and allow multi-tasking. Industry research group DRAMeXchange has found that DRAM prices dropped more than 15 percent in October, and by another 1.64 percent in November. It expects DRAM prices to fall more than 10 percent in the first quarter of 2019. Prices of NAND flash memory chips, which hold data permanently, have also slipped over the year.

Meanwhile, China is set to begin volume output of memory chips this year as it nationalizes the industry under President Xi Jinping's "Made in China 2025" technology strategy. Excess Chinese supply is expected to throw the chip market into further disarray.

Read more: Is China on course with 'Made in China 2025' amid trade row with US?

While the market is losing momentum, Korean chipmakers are focusing heavily on developing technologies that they hope will give them an edge over their competitors. Samsung will start producing the world's first sixth-generation V-NAND member chip this year. And by the end of the year it plans to start mass production of the world's first DRAM chips using extreme ultraviolet (EUV) lithography.

Industry analysts at Gartner believe though, that the downturn could be short-lived as applications for semiconductors are expected to widen in the years ahead. Automated driving employs 5G wireless communications technology and sensors, they said in a research note, and artificial intelligence requires a great deal of data processing. The chip market for smartphones is also expected to start growing again in 2020.