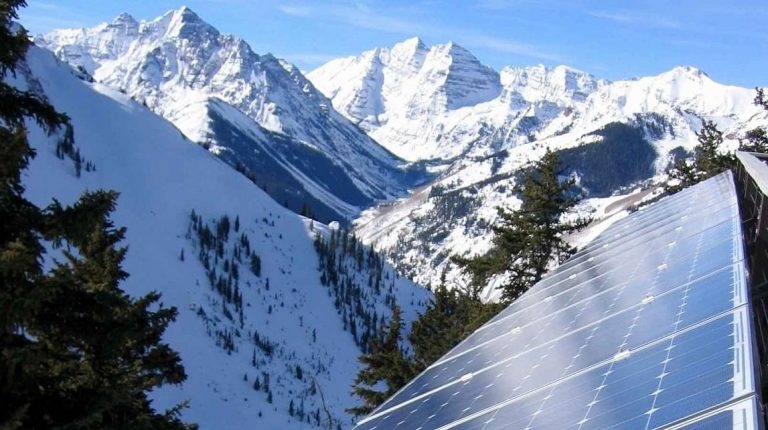 A recent study suggests that solar power can be generated not just summer but in winter as well, by placing solar panels on snow-covered mountains with steep tilt angles. The study aims to transform the seasonal production of solar energy through photovoltaic (PV) cells into PV panels from temporary—in the summer months only—to permanent in order to keep up with the increasing demand for electricity.

According to the results of the study which was published on Monday in the Proceedings of the National Academy of Sciences Journal, placing the solar panels on the snow-covered mountains in this position can generate similar amounts of energy, compared with the placement of solar panels in cities and flat lands-which have a lower surface area-and can convert a large amount of electricity produced from summer to winter, and balance the relation between electricity demand and production during winter and summer.

Electricity must be produced when it is needed, because it is difficult to store large amounts of it. Solar panels produce electricity when it is sunny, but not necessarily when the demand for it is highest. In countries which use a great extent of electricity for cooling purposes, demand and PV production might be well aligned, but in mid-latitude countries the need for electricity is highest in winter when it is cold and dark. Consequently, demand and production do not correlate, according to the lead author of the study, Annelen Kahl, from L’École Polytechnique Fédérale de Lausanne (EPFL), Switzerland.

Kahl informed Daily News Egypt that the higher the contribution of solar PV to a country’s electricity budget, the more critical this discrepencancy will become. “It is not just important to produce as much renewable electricity as possible, it is also important to provide it at the right time. Our results show that we can significantly improve from the conventional setting,” she said.

She noted that she started working with the renewable energies group at the EPFL in February 2015, but this specific study took probably about 1.5 years.

Achieving the study’s goals can be done by placing PV panels under steep tilt angles in a mountainous environment. The resulting effect of boosting winter electricity production is threefold: in the mountains there is less fog and cloud cover in winter than in the valleys (the typical urban installation sites), hence the incoming radiation that reaches the ground is already higher in winter.

Also, by installing the panels with a steeper inclination angle than possible in conventional urban settings (in Switzerland the law requires PV panels to flush with the roof surface), winter production is further increased because the PV surface is more perpendicular to the incoming radiation, taking into consideration that the sun is closer to the horizon in winter than in summer. The snow cover in the mountains increases the reflection of solar radiation onto the surface of the PV panel. This is due to the high reflection of snow in comparison to all other surface cover types such as soil, grass, or concrete.

The cost of the process depends on which PV technology you decide to install, and that is independent of whether it is installed on the roof of a house in a big city, on a building in a ski resort, or on a slope in the mountains. The cost of the associated infrastructure however can vary, according to support structures, cabling, and the connection to the electricity grid, and possibly road access for easy maintenance.

Explaining the process and techniques of generating energy from snow-covered mountains with steep tilt angles, Kahl said that there are three reasons why electricity production in the mountains is advantageous over production in urban areas.

The first reason is that there is less sunshine in winter, as clouds obstruct the sun, therefore less energy will reach the solar panels and they will produce less electricity. Hence, it is better to place them in locations with little cloud cover, such as the mountains. Generally, there is less cloud cover and fog at high elevations during the winter months.

The second reason is that with steep panel tilts, PV panels will generate the utmost amount of electricity when the sun rays hit the surface vertically. In winter the sun stays are very close to the horizon, and in order to receive sun rays vertically the PV panels needs to be very steep. In urban areas the panel inclination is often dictated by the roof’s slope, which is more oriented towards summer sun than toward winter sun. In mountain locations the tilt could be optimised for winter production.

The third reason is the extra radiation reflected from the snow-since the snow is white-because it reflects light at all visible wavelengths, which includes most of the energy that comes from the sun. Clean snow can reflect as much as 85% of the incoming energy from the sun. That is almost as if there was sunshine coming from the ground, and it also reaches the surface of the solar panel. How much of it reaches the panel depends again on the inclination. Subsequently, the panel collects extra energy, and can produce additional electricity if there is snow on the ground.