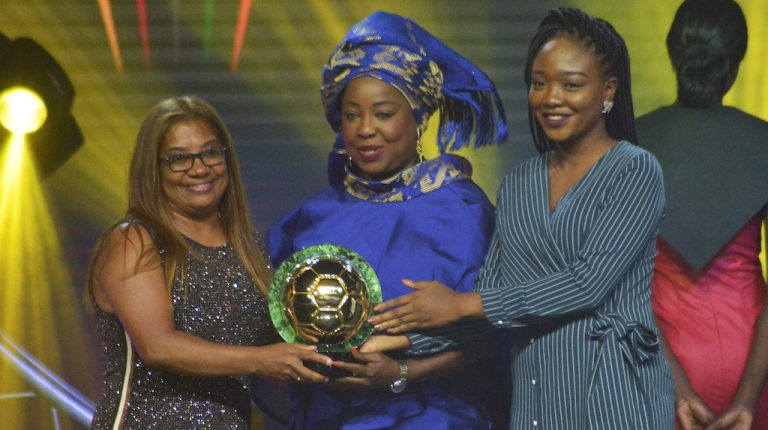 To traditional music, Africa celebrated the 2018 Confederation of African Football (CAF) awards at the Abdou Diouf International Conference Centre in the Senegalese capital of Dakar amidst a large presence of African football stars who previously won these awards and put smiles on their fans’ faces.

Nigeria beat the likes of Cameroon, Ghana, Mali, and South Africa to win the African Women’s Team of the Year award for the fourth time since its inception in 2010.

The win comes after the Super Falcons conquered Africa once again to win the 2018 Africa Women’s Cup of Nations (AWCON) title for a ninth time. Nigeria held the title after beating South Africa in the final 3-4 on penalties.

Nigeria qualified for the 2019 FIFA Women’s World Cup in France, along with South Africa and Cameroon.

South Africa was also among the winners, as the Women’s Coach of the Year award went to Desiree Ellis of South Africa, who led the Bafana Bafana to the final of the AWCON 2018.

Ellis beat off the strong challenge of Joseph Brian Ndoko of Cameroon, and Thomas Dennerby of Nigeria.

The South African coach deserved winning the award after she presented a very high performance with the national team.

The South African star Thembi Kgatlana was crowned the Best Women’s Player in Africa in 2018, after edging out Nigerian duo of Asisat Oshoala and Francisca Ordega.

The South African had a season to remember as her country finished as runner-up at the 2018 AWCON in Ghana, and secured a maiden Women’s World Cup ticket. Kgatlana was also named the best player at the 2018 AWCON, and the tournament’s top scorer with five goals in five matches.