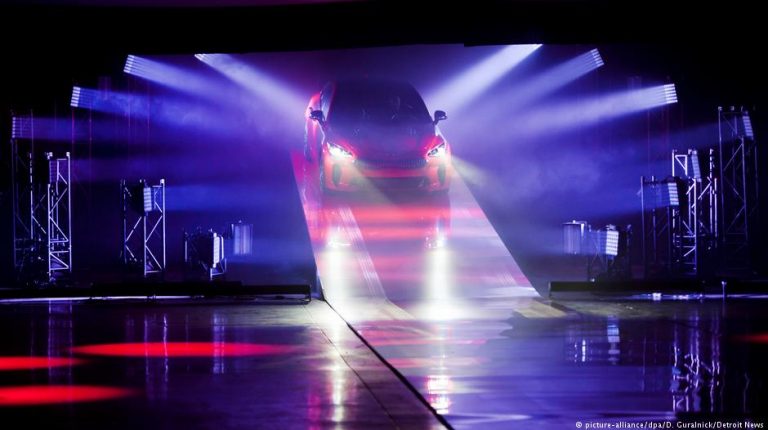 The North American International Auto Show kicks off next week. Largely shunned by European carmakers, the expo will be a concentration of American might. It may also be the end of an era.That new car smell. Flashing lights. Car doors that close seamlessly and silently. Models. Brochures. Horsepower. Crowds. Giveaways. This is what a car show is supposed to be like. And for decades this has meant shoveling through the January snow in Detroit to make it to the North American International Auto Show (NAIAS).

Now as the auto show is about to open, it is once again Detroit's turn in the spotlight. The past year wasn't kind to the American car business. Loud trade disputes hurt sales and caused automakers to rethink how and where they operate. Sergio Marchionne, the visionary CEO of Fiat Chrysler, died unexpectedly in July leaving the company adrift. In November, General Motors announced that it would close factories and cut its workforce by around 15 percent. Additionally, the old formula where engineers in Detroit set all the motor trends is at a major crossroads as computers, autonomous vehicles and high-powered batteries take over.

The expo is one of the oldest in the world and 30 years ago, it added "International" to its name to reflect its ambitions and the reality of the time. For decades, it was the first and most important exhibition of the year. In 2018, over 860,000 people attended the show, which claimed to have a direct economic impact on the city of about $480 million (€416 million). It is time for Detroit to try and shine again this year.

Putting on the breaks

But big muscle shows may be a thing of the past. Such spectaculars that bring together vehicle launches and the world's press in one place are being pushed aside by a growing list of new options open to manufactures to showcase their wares in the digital age through social media events and other direct marketing that give them undivided attention and don't have to work around specific show calendars.

"The Detroit show — along with all shows — is facing automakers' changing tastes in how they unveil products in the digital age. They are no longer looking to auto shows as their primary vehicle to unveil a new product," Dustin P. Walsh, senior reporter at Crain's Detroit Business, told DW.

For the Detroit auto show this has meant big changes. Slowly but surely, the expo has morphed into something different as Europeans and flashy high-end premium manufactures have stopped coming. In recent years, Rolls Royce, Porsche, Jaguar Land Rover and Volvo have dropped out completely. This year Audi, BMW and Mercedes didn't sign up. Of the Europeans, only the more pedestrian Volkswagen is bothering to show up.

Though US President Donald Trump may be pleased that he is unpopular with Europeans, being shunned by European carmakers could help advance the death knell of Detroit's international importance.

An additional thorn in the side of Detroit is the Consumer Electronics Show (CES) currently going on in Las Vegas. As vehicles include more and more electronics for connectivity, autonomous driving or other security features, some manufactures prefer to display in a more favorable environment. This mismatch between high-tech and horsepower has allowed the unlikely expo in the desert to continuously steal the Motor City's thunder.

Despite these changes, hundreds of cars, pickups and SUVs will nonetheless be shown this year in Detroit. And around 30 new vehicles are expected to be premiered, though this is a big comedown from past years where "there would be 50-70 new car unveils," said Walsh. In spite of its reduced circumstances, it is still sure to be a gas-guzzling paradise.

However, over the years, it has become clearer that Detroit no longer single-handedly drives the country, let alone the world. The American car market has always been different than that in much of the rest of the world. Perhaps its premier auto expo should reflect this homegrown difference.

More globally, Volkswagen has lived up to its name of being the people's car and tops the list of vehicle sales along with Toyota. But the markets for buyers have shifted and the Chinese are producing their own vehicles at Geely and Chery, while the Indians have Tata Motors. The consequences of international and technological competition have been far and wide.

For Detroit, 2019 will without a doubt be the end of an era for the auto show in one big way. As of 2020, it is moving from cold January to summery June and will be more interactive and spread out across the city. Though it will no longer be the first show of the year, it will try to keep its relevance by being innovative.

"If the 2020 auto show model is successful, I'd expect many of the other major shows to follow. If it's not, then we may see the big shows that draw press from around the globe become more like regional shows, catering to consumers more and more and less about the media coverage and new unveils," said Walsh.

For Detroit and the North American International Auto Show, it's an all-or-nothing gamble.