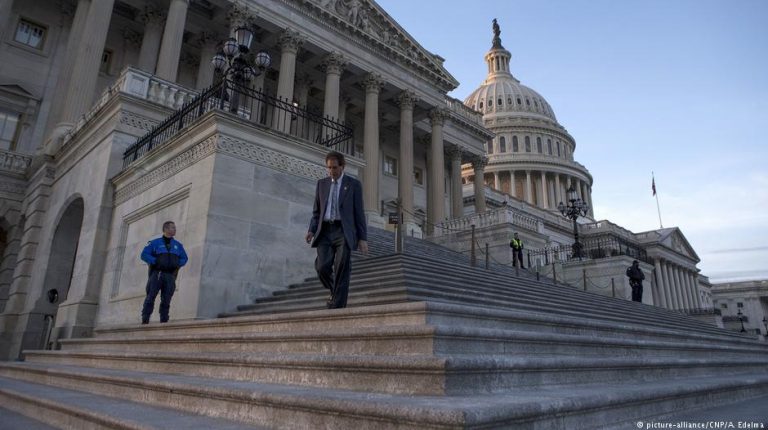 The partial closure of the US government has become the country’s longest-ever shutdown. The Federal Reserve says its immediate impact on the economy is negligible, but an extended shutdown could prove a drag.The United States' partial government shutdown entered its twenty-second day on Saturday, beating the 21-day shutdown during the Clinton administration to become the country's longest ever .

About 800,000 federal workers are affected by the shutdown, and many have missed their first paychecks of the year. But apart from the personal hardship, the wider impact of the shutdown on the US economy seems limited.

Speaking at the Economic Club of Washington on Thursday, US Federal Reserve Chairman Jerome Powell said that past government shutdowns didn't last long and, hence, hadn't left a mark on the economy.

"A longer shutdown is something we have not had," Powell, however, also said. "If we have an extended shutdown, I do think that it would show up in the data pretty clearly."

Powell noted that for the time being the US' central bank would have only limited data available to make predictions on the economy, especially about monetary policy decisions.

About one-quarter of the federal government has been shut down since December 22 because of a dispute over $5.7 billion (€4.95 billion) in funding for President Donald Trump's US-Mexico border wall. Trump's dispute with Democrats is showing no signs of ending after the president walked out of a negotiating session with Democratic leaders, who continue to reject his demand for funding.

Meanwhile, data coming out of the White House suggest that the shutdown could reduce the United States' total economic output by an estimated tenth of a percentage point every two weeks. For context, the US economy is forecast to have grown by about 2.8 percent in the fourth quarter of 2018.

Kevin Hassett, chairman of the White House Council of Economic Advisors, believes that the US unemployment figures could also rise this month, because federal employees furloughed during the shutdown are considered unemployed.

"So when we see the January jobs number, it could be a big negative," Hassett told reporters earlier this month, adding that those workers would, however, ultimately get paid.

Some economists also expect to see a big pullback in spending if government employees can't receive their paychecks. On balance though, they echo the Fed's view that the shutdown so far has had a minor impact on the economy.

According to Goldman Sachs analysts, the ongoing shutdown will affect gross domestic product (GDP) by about 0.07 percentage points each week.

"We do not expect the partial shutdown to have substantial effects on financial markets. We note that the shutdown is unrelated to the debt limit and has no implications for Treasury financing," the US investment bank said in a note.

Robert Dye, chairman of the economic advisory committee of the American Bankers Association, said it was still difficult to "put a number on" the cost of the shutdown. "The shutdown that we've had so far, particularly because it was over the holidays, is a fairly minor drag on the overall economy," he said, adding that if it were to extend into another paycheck or two, it would exert a "meaningful drag" on the economy.

Already, the shutdown is affecting projections for US growth this year. On Thursday, JPMorgan Chase's chief US economist, Michael Feroli, cut his first-quarter growth forecast to a 2 percent annualized pace from 2.25 percent, citing the shutdown.

Despite the uncertainty surrounding the government shutdown, Fed chair Jerome Powell doesn't expect the US economy to slip into a recession in 2019.

"I don't see a recession," he told the Washington Club gathering, explaining further that two key risk factors for recession, which were inflationary overheating and asset bubbles, didn't exist. "The principal worry I would have is global growth," he said. "It's a tightly integrated global economy and financial markets and we will feel that."

The Fed, which is self-funded, is not affected by the partial shutdown. But the US Department of Commerce, which produces some important economic reports, has been hit. The shutdown already has delayed the release of the monthly foreign trade statistics, which were due out on Tuesday. And more key data on the state of the US economy, such as fourth quarter economic growth, consumer spending and personal income, are also unlikely to be released.

Meanwhile, Donald Trump is planning to declare a national emergency, saying he would be "absolutely right" to resort to the measure in order to break the impasse with the congressional Democrats.

The move could trigger a backlash among lawmakers as well as court challenges. But Trump told reporters: "The lawyers have so advised me. I'm not prepared to do that yet. But if I have to, I will."

In a sign that the American president might soon make a decision on that, he canceled a trip to the World Economic Forum gathering in Davos, Switzerland, which was planned for later this month.

"Because of the Democrats intransigence on Border Security and the great importance of Safety for our Nation, I am respectfully cancelling my very important trip," Trump wrote on social media on Thursday.