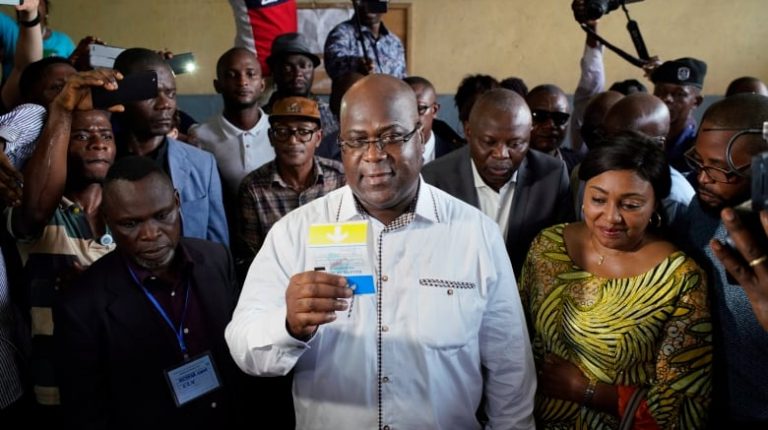 Egypt welcomed the success of the election process which took part in the Democratic Republic of the Congo (DRC) on 30 December, and its preliminary results which were announced earlier last Thursday, with the electoral commission announcing that Felix Tshisekedi won.

According to the commission, Tshisekedi received more than 7m of the 18m votes cast, to represent 38%.

Fayulu, who led in the polling, received 6.3m votes, while Shadary received 4.4m.

In a statement, the spokesperson for the Egyptian Foreign Ministry, Ahmed Hafez, congratulated the “Congolese people for holding democratic elections with the participation of political parties, hailing the high turnout of the voters to cast their ballots.”

Moreover, Hafez said that Egypt has closely followed up the electoral process in Congo, confirming its support to the choices made by the Congolese people and the country’s sovereignty.

He also highlighted the importance of such a step in “preserving peace and stability across the Congo.”

On the other hand, France’s Foreign Minister Jean-Yves Le Drian became the first foreign political leader to call for transparency on the electoral process.

“We must have clarity on these results, which are the opposite to what we expected,” Le Drian told the French broadcaster CNews.

The Belgian Foreign Minister Didier Reynders also questioned the results and stated that Belgium will use its temporary seat on the UN’s Security Council to seek clarification about Tshisekedi’s win.

“We have some doubts that we need to check and which will be debated in the coming days in the Security Council,” informed Reynders the Belgian public broadcaster RTBF, whose country was Congo’s former colonial power.

“It is important that any disagreement over the proclaimed results, notably that they did not reflect voters’ wishes, be resolved peacefully,” the AU head said in a statement.

Shortly after the results were announced, Tshisekedi paid his respects to outgoing President Joseph Kabila, describing him as “an important political partner.”

However, Catholic leaders in the DRC said that Tshisekedi’s surprise win did not match the tallies compiled by 40,000 monitors deployed by the church for the 30 December election.

The provisional results are disputed, with the country’s highly regarded Catholic church saying that its findings from 40,000 election monitors located at diverse polling stations showed a different winner. The church said that it is unable to name a victor under the election law. However, opinion polls before the vote indicated a landslide victory for opposition candidate Martin Fayulu, whom the Independent National Electoral Commission (CENI) named as the runner-up with 34.8%.

Fayulu accuses Tshisekedi of making a power-sharing deal with departing President Joseph Kabila, and with CENI of rigging the vote in Tshisekedi’s favour.