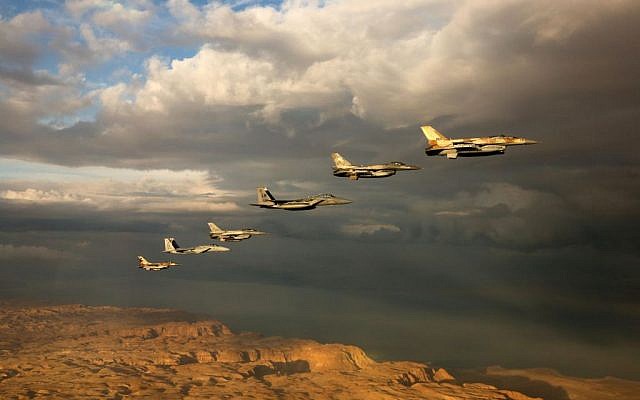 Syria’s military forces announced on Friday that Israeli aircrafts have launched a bunch of missiles toward the Syrian capital city Damascus, and that Syrian air defence forces have intercepted a number of them.

“The results of the aggression so far were limited to a strike on one of the warehouses at Damascus airport,” according to the Syrian News Agency SANA, citing a military source. It added that the attack took place at 11:15 pm.

SANA broadcast footage of the interception of the Israeli missiles by the Syrian air defence. The footage shows the firing process and explosions could be heard from the video.

The last Israeli raid against Syria was late in December 2018, and the attack resulted in wounding three Syrian soldiers.

The UK-based Syrian Observatory for Human Rights said that the strikes hit three targets in the western and southern rural areas close to Damascus. The targets are used as stocks for the Lebanese armed militia Hezbollah and the Iranian forces, according to the observatory.

Israel justifies its aggressive actions by countering the Iranian influence in the region and targeting the Iranian military bases. It has conducted 200 air raids against Syria.

Moreover, the US military forces started withdrawing some equipment but not yet troops from Syria following US President Donald Trump statement about withdrawing US forces from Syria after years of the battle against the Islamic State (IS) group.

According to US media, two military officials said that he number of US troops “might actually increase slightly in Syria, to help protect the final process of pulling out — an operation that is still expected to take at least four to six months to complete.”

In December, Trump announced the withdrawal of US troops from Syria in a surprise for the US’s allies in the international alliance against the IS. The number of US troops in Syria is about 2,000 who are mostly army soldiers and marines.

The US troops in Syria are located in northeast Syria and in the Middle Euphrates River Valley, aiming to eliminate the remaining pockets of IS fighters and secure newly-liberated areas from their return.