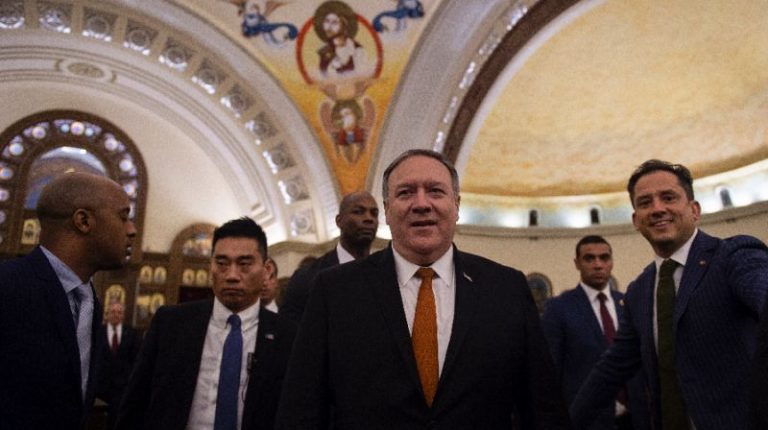 The US Secretary of State Mike Pompeo announced on Friday from Cairo, that a summit will be held in Poland in February with the aim of supporting stability and freedom in the Middle East, and to highlight the Iranian regional influence.

The international summit, which will take place in Warsaw from 13 to 14 February, will focus on the Middle East’s stability, peace, freedom, and security, and will include an important element to ensure that Iran is not a destabilising influence, according to a statement from the US Department of State.

The statement stressed the importance of keeping the Gulf Cooperation Council unified in order to counter the Iranian threats.

Pompeo’s statements came amid his eight-day tour in the Middle East to discuss numerous issues, including the situation in Syria and Yemen, the Gulf Crisis, and the war against the Islamic State (IS) group. The tour includes Iraq, Jordan, Egypt, Kuwait, Bahrain, Qatar, Oman, the UAE, and Saudi Arabia.

He further elaborated that the US is redoubling its efforts to put pressure on Iran, and sought to convince its allies in the region that it is committed toward fighting the IS group, despite the US President Donald Trump’s recent decision to pull their troops out of Syria.

He noted that the US will use diplomacy, and will work with its partners to expel every last Iranian boot from Syria and will bolster efforts “to bring peace and stability to the long-suffering Syrian people.”

Pompeo criticised the administration of the former US President Barack Obama “for their misguided and wishful thinking that diminished the US’s role in the region, and emboldened its main enemy Iran.” He said that Obama was not a strong ally for Israel, was not firm in dealing with the “Islamic terror,”  in addition to making a deal with Iran.

In May 2018, Trump implemented his promise and pulled his country out of the Iran nuclear deal, ignoring the warnings of the European allies who stressed that they will uphold the deal entitled, the Joint Comprehensive Plan of Action (JCPOA).

On the other hand, Iran’s Foreign Minister, Mohammad Javad Zarif, wrote on Twitter “Whenever/wherever the US interferes, chaos, repression, and resentment follow,” to mock Pompeo’s words when he said, “when America retreats, chaos follows.”

Moreover, the Iranian Foreign Ministry’s spokesperson, Bahram Qassemi, said that the US is attempting to create chaos in the region again. He added that Pompeo clearly announced that the US is an enemy of Iran, “and he should know that we -Iran- will defend its national and strategic interests.”

Last Thursday, Pompeo met President Abdel Fattah Al-Sisi in Cairo. After the meeting, Pompeo tweeted that the US stands firmly with Egypt in its endeavours to protect religious freedoms, and in the efforts directed against terrorism.

Pompeo also met with Egypt’s Minister of Foreign Affairs, Sameh Shoukry, and held a joint press conference, in which Shoukry said that the meeting with the US State Secretary was a strategic one, as they were involved in various consultations, including increasing commercial cooperation, and holding strategic meetings, as well as 2+2 talks.

The meeting also addressed means of countering attempts of certain regional countries to expand their influence in the region, as well as the Grand Ethiopian Renaissance Dam (GERD) issue, and the importance of preserving Egypt, Ethiopia and all the concerned parties’ interests.

He also added that the US has succeeded in eliminating 99% of IS group. When mentioning the terror threat in the region, Pompeo described the Muslim Brotherhood as a terrorist group, the first time for a US foreign secretary to do so. He stressed the US’ support for Egypt’s efforts to fight terrorism in Sinai, and Israel’s efforts against terrorism.

During his speech at the AUC, Pompeo said that America has always been a liberating force in the Middle East, and “when America retreats, chaos follows.”

“We strongly support President Al-Sisi’s steps for ensuring religious freedoms,” Pompeo said. He added that the US administration is working on having strategic economic relations with countries like Egypt and Jordan. “Now the real beginning for US to act as a force of ‘good’ in the region, under the new administration, the US faced the reality of Islamic extremism, Al-Sisi supported us in these efforts, and I applaud him for this,” he declared.