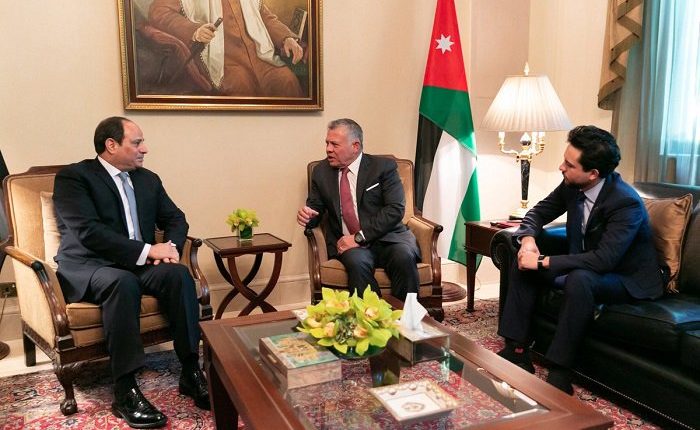 During the meeting which was held in Amman, Al-Sisi praised the distinguished relations between the two countries on popular and official levels. He expressed Egypt’s interest in boosting relations with Jordan on issues of shared concern, and mutual Arab efforts to confront the threats that the Arab nation currently faces, according to a statement from the presidency’s spokesperson Bassam Rady.

Rady said that the discussion between the two leaders addressed the means of boosting bilateral relations in the economic, commercial, and investment fields, as well as medical manufacturing, transportation, energy, and exporting natural gas from Egypt to Jordan.

King Abdullah praised the two countries’ relations and expressed his aspiration for developing these relations further. He also praised Egypt’s pivotal role in the region and its efforts for achieving stability and confronting terrorism for Muslim and Arab nations.

The meeting also discussed updates of regional and international issues, particularly updates of the Palestinian issue and the peace process in the Middle East. Al-Sisi and King Abdullah stressed the importance of resuming negotiations between the Palestinian and Israeli sides.

Negotiations should be based on the two-state solution and the Arab peace initiative, in order to reach a comprehensive and fair resolution for the Palestinian issue. An agreement which ensures the legitimate rights of the Palestinian people and the establishment of their state on the ‘4 June 1967 borders’, and declaring eastern Jerusalem as the capital of this state, according to the statement, might help in restoring stability in the Middle East.

Al-Sisi and King Abdullah also discussed the mutual efforts for countering terrorism, while stressing the importance of supporting international efforts in fighting terrorism within the framework of a comprehensive strategy to combat radicalism.

The two leaders also discussed the situation in Syria, Libya, and Yemen, and the necessity of reaching a political solution for these crises.