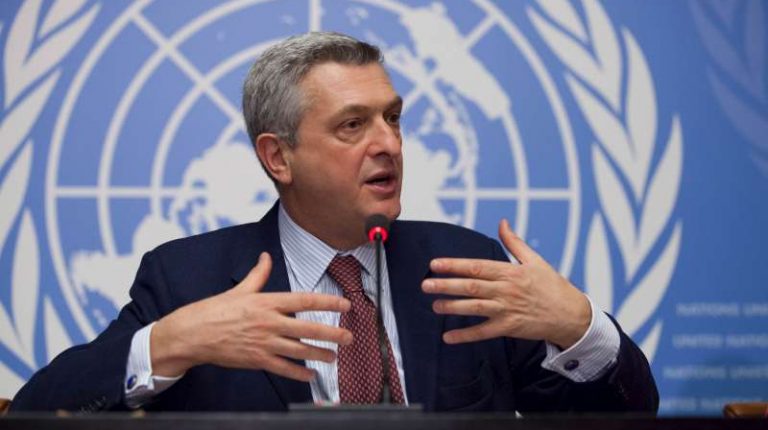 President Abdel Fattah Al-Sisi met with the United Nations High Commissioner for Refugees (UNHCR), Filippo Grandi, on Monday during his two-day official visit to Egypt, to discuss the refugee situation in the country, a source from the UNHCR informed Daily News Egypt.

Grandi also met with the Secretary-General of the Arab League, Ahmed Aboul Gheit, where they discussed the developments of the Libyan, Yemeni, and Syrian crises, as well as the UNHCR’s role to support Egypt’s efforts in helping refugees, noted the source.

He added that the UN official convened with ambassadors of donor and resettlement countries to discuss their support for the UNHCR and refugees in Egypt.

Grandi’s visit witnessed the tackling of several regional and global issues in light of Egypt’s next presidency of the African Union (AU) in 2019.

On the first day of his visit, Grandi sat with the Minister of Education Tarek Shawky, the Minister of Interior Mahmoud Tawfik, and the Deputy Foreign Minister for African Affairs, Hamdi Loza. He also visited the UNHCR-Egypt refugee reception centre (RRC), where he spoke with refugees and asylum-seekers and witnessed a permanent refugee artisan exhibition which features handmade objects made by refugees of different nationalities residing across Egypt.

“Egypt continues to be a country of great importance and an important partner for the UNHCR in both Arab and African regions, and a country that is at the crossroads of so many population movements,” said Grandi in a statement.

During his meeting with the minister of education, Grandi praised Egypt for granting Syrian, Sudanese, South Sudanese, and Yemeni refugees, access to the public education system in the country.

Both sides discussed ways to enrich the culture of dialogue among refugees and Egyptians, and integrate their culture and language in the classroom environment, so that students can collectively benefit and interact together.

Additionally, Grandi and the UNHCR Regional Director, Amin Awad, were invited to a luncheon with high-profile officials from the foreign and education ministries.

During the luncheon, Grandi praised the hospitality offered in Egypt to the people fleeing oppression everywhere. He also reiterated the UN’s support to Egypt’s demand for more funds from donor countries to maintain its support of refugees and asylum-seekers in the country.

Moreover, Grandi sat with the Minister of Interior and commended the security’s efforts in providing protection for refugees and asylum-seekers. He repeated the UNHCR’s request to decentralise the issuance of residency permits, and the minister affirmed that he will consider this issue.

Furthermore, Grandi’s visit was the first in 2019, and the second since he assumed his position in 2016.