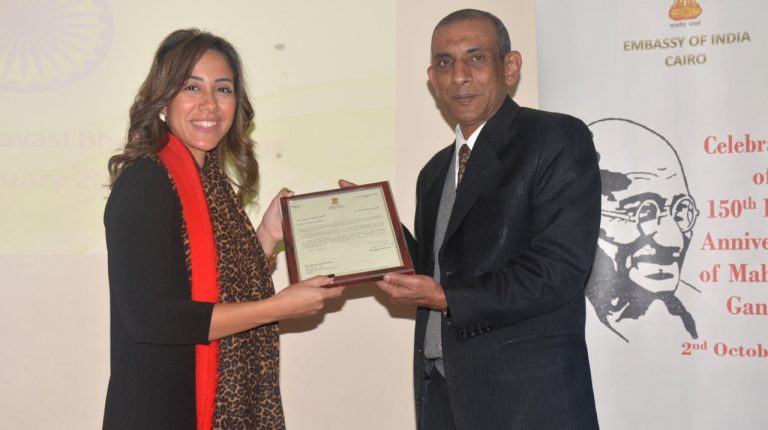 Decades after his death, the soul of veteran Indian philosopher and activist Mahatma Gandhi will persist, leaving behind the morals he spent his life teaching others carved in gold in history. The icon’s birthday is an annual commemorated event which cannot be missed in Egypt.

The Indian ambassador in Egypt, Rahul Kulshreshth, handed Reem Ezz El-Din, an Egyptian singer, a gratitude letter from the Indian Minister of External Affairs Sushma Swaraj in appreciation of her efforts in commemorating Gandhi’s 150th anniversary.

Ezz El-Din was one of the artists who revived Gandhi’s 150 birthday through singing his favourite song, Vaishnav Jan To Tene Kahiye, (A Good Person) written by Hindi poet Narsimha Mehta, alongside 123 singers from all across the globe in a musical contribution dedicated to him.

The singer, along with her band, Zai Zaman (Like Old Days), were was honoured during a celebration which took place at Zamalek’s Maulana Azad Centre for Indian Culture.

“This song is a very important element of the Indian culture because it conveys all the principles and ethics. It was his favourite song which he used to sing regularly,” Kulshreshth informed Daily News Egypt, adding, “by choosing his favourite song, the idea was to emphasise that Gandhi’s message of love, peace, and ending violence are timeless concepts, and that is what [we believe] will continue to inspire the whole world.”

He also asserted that Ezz El-Din’s performance of the song is a clear evidence of the strong cultural ties which both Egypt and India share.

In his speech, Kulshreshth said that Ezzi El-Din’s voice was one of the most remarkable accredited features of the combined performances.

At the celebration, the embassy displayed a video clip shot of the band while singing the song while in the background Egypt’s most frequently-visited touristic places were displayed.

As for Ezz El-Din, she expressed her fascination with Indian culture, which was consummated by her her performance of the song.

“I have been fascinated with Indian culture for so long, but I did not believe there would come a day that I would be singing such an important song for this culture,” she said.

The band aimed to add an eastern twist to the song through the use of different instruments.

“We could not change the song’s main rhythm, but we aimed to add our own taste in music in it as an attempt to make it unique,” she explained.