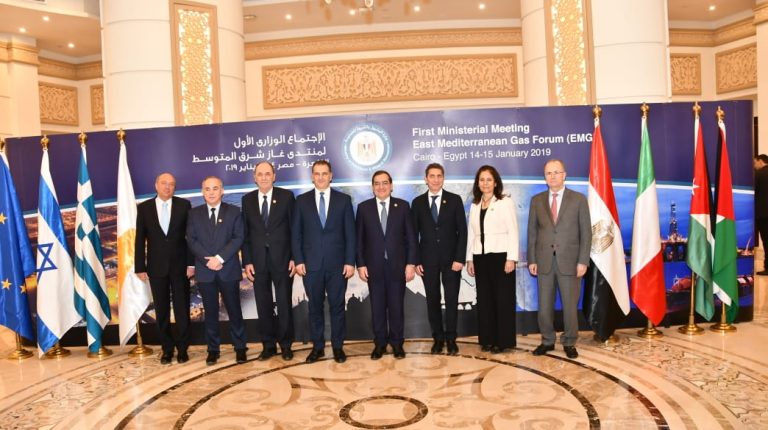 The Ministry of Petroleum held a meeting with the energy ministers of Cyprus, Greece, Palestine, Italy, Jordan, and Israel to agree on the establishment of the East Mediterranean Gas Forum (EMGF).

A source in the oil sector informed Daily News Egypt that the meeting included offering Egypt’s oil potentials from pipelines, new discoveries, ports, and factories to liquefy gas and export it to international markets.

He added that the gas forum between the seven countries will contribute to increasing joint cooperation in exploring the untapped potential of member states, where pipelines will be constructed to connect a number of countries to Egypt to transfer their gas production to the factories to be exported to international markets or to import them to Egypt.

The source pointed out that Egypt has a natural gas liquefaction plant, making it the main hub in the Mediterranean region for the export of gas to European markets, as a similar factory will need investments of $7bn and an implementation period of over two years.

He pointed out that Damietta and Idku liquification plans capacity amount to 1.88bn cubic feet of gas per day(cfpd), while the national gas pipelines in Egypt has a capacity of 9bn cbpd.

The member states agreed to put aside any political dispute and cooperate in the EMGF in order to optimize the utilisation of the available resources and achieve the largest economic return for the member states.

In a related context, ministers participating in the forum meeting said that the large gas discoveries in offshore fields in the eastern Mediterranean will affect the development of energy and economic development in the region.

They stressed that the expansion of new discoveries and their optimal utilisation will have a profound impact on energy security in the region, with the need to cooperate in accordance with the principles of international law in the Eastern Mediterranean region between existing and potential gas producers and consumers.

A source in the oil sector said that the forum will contribute to the establishment of a regional gas market which serves the interests of its members and secures supply and demand while obtaining competitive prices in commercial transactions associated with natural gas.

He added that the forum will cooperate with private sector companies working in the gas field, allowing their participation in its activities as part of the advisory group.

The energy ministers of the member states have invited senior officials to start formal talks on the structure of the forum with a view to agreeing on details and returning the ministers to recommendations for discussion at the next meeting scheduled for April 2019.