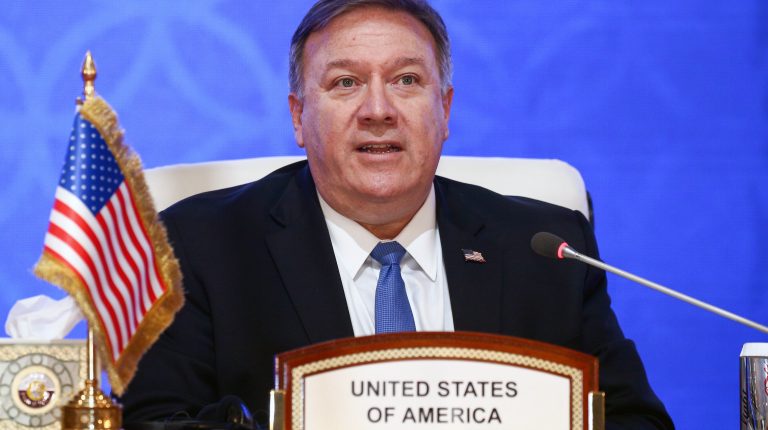 US Secretary of State Mike Pompeo said on Sunday that “disputes between countries that have a shared objective are never helpful,” during a joint news conference with the Qatari Foreign Minister.

Speaking in Doha during a nine-nation regional tour, Pompeo said that “great things” were happening between Qatar and the United States.

Pompeo said Gulf unity was essential for a planned Middle East Strategic Alliance that would include Jordan.

Secretary Pompeo said he signed a memorandum of understanding with Qatar regarding the expansion and renovation of Al-Udeid Air Base, the regional headquarters of the US Central Command.

In 2017, Saudi Arabia, the UAE, Bahrain and Egypt severed diplomatic, trade, and transport ties with Qatar. Yemen, Libya and Maldives later followed suit. Several of the countries ordered Qatari diplomats to leave and recalled their ambassadors from Doha.

Qatar suspended all flights to Saudi Arabia, the UAE, Egypt, and Bahrain.

The UAE accused Qatar of destabilising the region by supporting “terrorist, extremist, and sectarian organisations.”

Doha dismissed the allegations, saying they had “no basis in fact.”

Pompeo was in Qatar as part of a nine-nation trip to the Middle East aimed at allaying regional allies’ concerns about US commitments to them, and to continue an alliance against Iran.

On Sunday, the Wall Street Journal reported that the White House’s National Security Council, led by National Security Advisor John Bolton, sparked deep concern among Pentagon and State Department officials last year when it asked the Pentagon to provide it with options for striking Iran.

The request followed a September attack by a group of militants aligned with Tehran in Iraq. The group fired mortars into Baghdad near the US embassy, the Wall Street Journal reported.

According to the report, the Pentagon complied with the request. However, it is not known if the options were sent to the White House or if President Donald Trump knew about them.

On Sunday, Pompeo flew on to Saudi Arabia, Iran’s main adversary in the region. Crown Prince Mohammed bin Salman, the de facto ruler of the kingdom, has faced intense international scrutiny over the murder of Saudi journalist Jamal Khashoggi inside the Saudi consulate in Istanbul.

“We will continue to have a conversation with the crown prince and the Saudis about ensuring the accountability is full and complete with respect to the unacceptable murder of Jamal Khashoggi,” Pompeo said on Sunday.