Egypt’s month-over-month (m-o-m) inflation witnessed a fall of 3.4% in December 2018, according to the date released by the country’s statistical office, the Central Agency for Public Mobilisation and Statistics.

According to a Renaissance Capital report, the big change was in food prices, which contribute to 40% of the Consumer Price Index basket. A 6.7% fall in December food prices following a 1.8% fall in November, reversed the surprise increases of 2.9% in August, 4.8% in September, and 3.5% in October. Consequently, the headline inflation dropped from 15.7% to 12%, in line with Renaissance Capital’s previous forecasts that inflation would be 11-13% by December 2018.

Moreover, the report indicated that big improvements in vegetable wholesale prices in November (tomato prices were down 50%) – but the wholesale figures turned higher in December and so the investment bank believed that an increase by perhaps 2% m-o-m- in January is expected.

How inflation will influence exchange and interest rates

The report indicated that the latest real effective exchange rate estimate in May 2018 from Bruegel put the long-average exchange rate at EGP 15.3 per dollar since 1995 in today’s money.

Accordingly, following the stunning December inflation figure pushes that back to end-2019, the report estimated the EGP “fair value” will only touch EGP 18 per dollar in February 2020, and EGP 20 in July 2021. 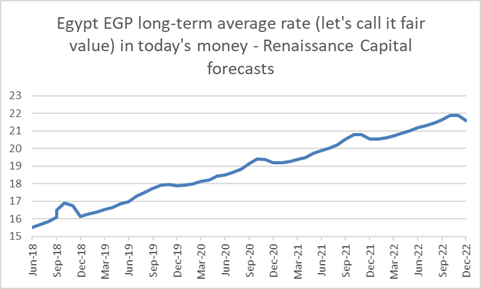 Indeed, it is possible that Egypt could keep the spot foreign exchange rate at EGP 18 per dollar until mid-2021, and the currency would only be about 10% overvalued at that point – relative to the country’s own history.  That’s less than India is overvalued at today.

However, Renaissance Capital suggests that Egypt considers some sort of crawling peg monthly devaluation, that would let the currency remain on the cheap side of fair value and help job creation in export industries via a cheap exchange rate.

Regarding interest rates, given the volatility of food and oil prices, led the bank to forecast that the Central Bank of Egypt may stay cautious until they have clarity on the July 2019 inflation figures, before applying any interest rate cuts.