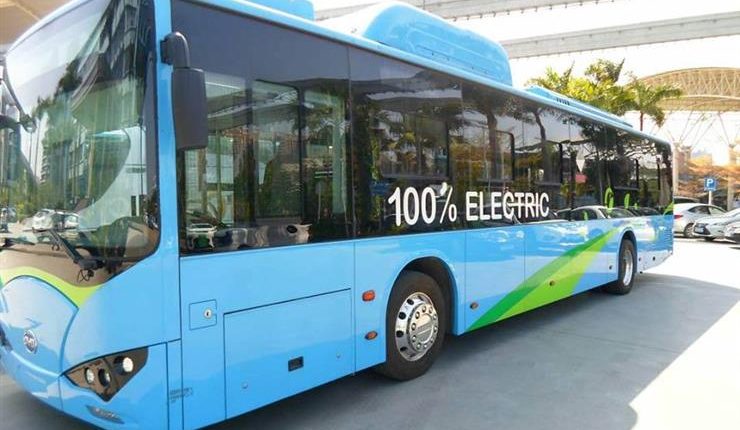 The Head of the General Authority for Passenger Transport in Alexandria, Major General Khalid Eliwa, said that the electric bus was pulled from the streets of the city of Alexandria after a three month pilot run, adding that he is waiting for the result to be issued by the Military Technical College and the General Secretariat of the Ministry of Defence. He stressed that the electric bus was a unique mass transport method experience, as it is environmentally-friendly and reduces environmental pollution, as opposed to traditional engines which cause air pollution due to harmful emissions, in addition to the absence of noise compared to conventional engines.

He added that the electric bus is not a source of pressure on the state’s resources. The electric bus has a lower operating cost than the diesel-powered bus. He explained that the petroleum products are imported from abroad in hard currency, and the international price of diesel is estimated at EGP 17.8 per litre, while the global price of electricity is EGP 1.25 per kW. He noted that diesel accounts for 70% of fuel subsidies, while electricity subsidies amount to 5% only of total subsidies.

He explained that the maintenance of electric buses are conducted by the manufacturer, adding that the authority sends Egyptian engineers and technicians to train on maintenance.

Moreover, the new bus has a three-year warranty or 500,000 km whichever is closer, plus several other warranties, such as a battery warranty of up to eight years, chassis for seven years, and a five-year warranty on all electric devices on the bus.

On the future plans of the authority, Eliwa said that there are several attempts to assemble electrical buses in Egypt, after the Military Technical College end of the general secretariat of the ministry of defence complete assessing the pilot programme. He highlighted the authority’s plan to convert 200 buses to work on electricity instead of diesel in seven to eight years.

Eliwa expected the 14 other buses to start operating in 2.5 months after the success of the experiment.

In a related context, Gaber El-Sayed, head of the Anfushi station, said that the electric bus has an excellent structure and is comparable to the tourist buses in terms of reliability and comfort, as well as running with clean energy, pointing out that the new electric bus is the first means of transportation equipped with disabled places.

El-Sayed added that the electric bus requires a driver’s assistant, which is the role of the collector. During the test period, two of the most efficient drivers were appointed. They were tested by the chairperson and the general manager. They were selected on several criteria including efficiency, seniority, training courses, presentability, and the ability to write reports and assess the experiment. They were trained on dealing with the bus’s devices.

He added that he did not receive any complaints from passengers or even by the bus drivers during the test period of three months, stressing its success and the praise from the passengers. “Some customers preferred to wait for the new bus instead of jumping on other diesel-fuelled buses on the same lines,” he said.

The electrical bus line starts from the Anfushi station through to Abu Abbas, Qweiri, Manshiya, Raml, and El-Shatbi to Mamoura. It was recharged at Semoha garage for 2-3 hours that were enough for 250 km. The first trip began at 6am and lasted until 1am. Each journey took 1hour ans10 minutes from Anfushi to Maamoura and back.

The ticket price was set at EGP 10 during the pilot run. The bus accommodated 35-37 passengers, including four seats for the disabled.

Noteworthy, the experience of the electric bus came through the announcement by the General Authority for Passenger Transport in Alexandria about a general international tender for the supply of 15 electric buses. The tender was signed by one of the Chinese companies.

The Chinese company supplied one bus tested for three months starting from October. After the success of the experiment, they will contract for the remaining quantities.

The ticket price will be set in accordance with costs. It is equipped with surveillance cameras, internet, GPS, and AC, in addition to a system to help people with special needs.