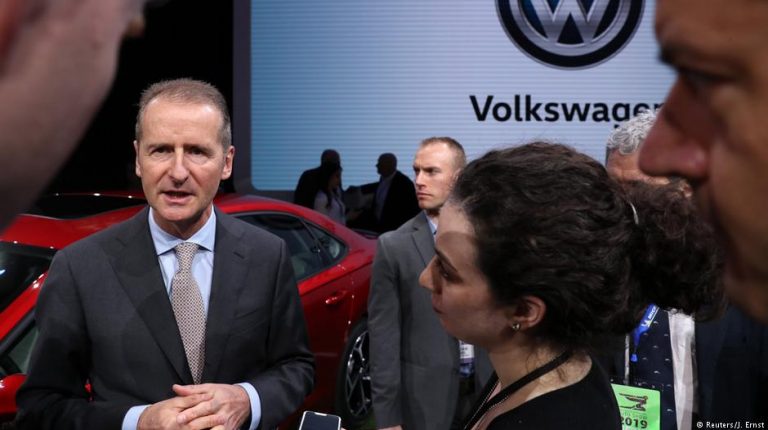 The North American International Auto Show is still the biggest and premier auto show in North America. But, this year, only one German carmaker bothered to show up. Maya Shwayder reports from Detroit.Shine the hubcaps, rev up the engines, and break out the unnecessary blonde models. The Detroit auto show is back for another year.

The North American International Auto Show is still the biggest and premier auto show in North America. With the huge market up for the taking, automakers flock to the Motor City every year, and put on slickly produced reveals and high-caliber performances.

But, among the usual heavyweights on display this year like Toyota and Ford, where are the Germans?

Daimler, Audi, Porsche, and BMW are all big names that you won't see at this year's show. Volkswagen is the only German brand that bothered to show up.

It might be a sign that German automakers don't see much value in coming to Detroit anymore. After all, these days a lot of the cool, sexy, new technology innovations debut at the Consumer Electronics Show in Las Vegas, which wrapped up this year just days before NAIAS began.

But if that's the case, why did Volkswagen bother to come here?

Volkswagen CEO Herbert Diess told DW that the US market is still of great importance for VW.

"We continue to invest heavily because we believe that the Volkswagen brand still has great growth potential," Diess said. "And that's why it makes a lot of sense to be here in Detroit — Detroit simply is still the most important show for the American market."

And, he adds, it's the first show of the year. Which makes it even more attractive to Volkswagen.

But by that reasoning, VW soon may find Detroit far less attractive: The auto show is changing its date from January to June next year, in a move that's billed as a "total reboot" of the show and an attempt to cater more to the public and keep NAIAS relevant.

A reboot of its US image

There's no doubt, though, that VW is going in hard on the US market. At Volkswagen's press conference at NAIAS this year, the emphasis was less on the innovation and much more on VW's investment and job creation in the US.

VW CEO Herbert Diess even brought outgoing governor Bill Halsam of Tennessee on stage to talk about VW's fond relationship with middle America, and led a round of applause for the mayor of Chattanooga, TN, where VW announced they would be building their second US factory.

All in all, Diess said, the new facility would create 1,000 jobs for Chattanoogans, in addition to the 12,000 auto sector jobs and 3,800 other jobs they had already created, and the $2.3 billion (€2 billion) they said they'd invested in the US.

"We are 100 percent committed to the US, and to our 650 car dealers here," Diess said from the stage.

All this, in the face of difficult and unresolved economic questions of tariffs and trade, and just as VW is emerging from under the cloud of the diesel gas emissions scandal that's embroiled it since 2015. It was a good-will press blitz to show the people of the US that Volkswagen is on their side, after agreeing to pay a $2.8 billion fine to the US government.

While in Detroit, the VW CEO and his counterpart from US automaker Ford, Jim Hackett, announced an alliance on vans and pick-up vehicles and said they would join forces on the development of electric and driverless cars. The colaboration would start with the sale of
vans and medium-sized pickups in 2022 and that profits would improve as a result by 2023.

"Volkswagen and Ford will harness our collective resources, innovation capabilities and complementary market positions," VW Chief Executive Officer Herbert Diess said. "The alliance will be a cornerstone for our drive to improve competitiveness." The deal will not include a merger or any exchange of equity.

The collaboration on vans and possibly other areas show how carmakers are pooling resources to better compete with tech giants like Alphabet's Google. They are plotting inroads as digital services undermine traditional business models. The partnership will help cut development costs and optimize factory capacity.

But will they stay with Detroit?

Scott Keogh, the president of Volkswagen Group of America, told DW they had a commitment to the US market (and, by extension, at least for now, to showing up at the Detroit Auto Show).

"I think being in Detroit, which is the major auto show, makes sense," Keogh said. "The product is made here, it makes sense to be here…and we're proud to be here."

Keogh also mentioned that Detroit's "transformation" — the slow, but steady revival of the once economically dead city — was something that Volkswagen wanted to be a part of.

When asked, however, if VW was committed to showing in Detroit every year, Keogh said things in this business were not "fixed and locked."

"I'm not one of these people who says that auto shows are dead and dinosaurs," he said. But VW would look for opportunities to "stand alone, plus join others, like this (in Detroit)."

And, he said, we would have to see what the show's move to the summer time would bring.