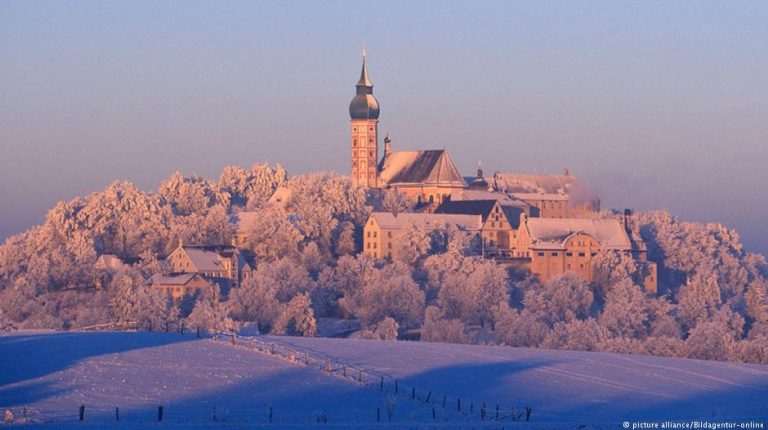 One of Bavaria’s oldest pilgrimages leads to Andechs Monastery, high above the shores of Ammersee. Whether you are on a pilgrimage or a hike, the ascent makes you thirsty. Time for a winter beer.As soon as he opens his mouth, it becomes clear that the white-haired man seated at the table has not traveled far for his pilgrimage. In a thick Bavarian accent he invites his companions to enjoy their meal: "An Guadn," which means "Guten Appetit." This Saturday, as usual, the monastery beer restaurant is heaving with people. Northern 1423. As soon as I enter I am impressed by the church's rococo style. In the center is an ornate high altar featuring a gilded Madonna.

A glance downwards reveals something extraordinary: a mouse peeking out of a crack at the foot of the altar.

The mouse immortalized here is credited with saving the site from neglect. Legend has it that in 1388, a mouse dragged a scrap of paper containing information about the lost relic treasure into the former chapel. This allowed the relics which Count Rasso had brought from the Holy Land to be retrieved.

Today, visitors can view the relics as part of a tour of the Holy Chapel (Heilige Kapelle).

Most visitors to the Andechs Monastery do not come as pilgrims or to pay tribute to the "Three Holy Hosts." Nor do they come to pay their respects to the six monks who live there to this day. Most of them are tourists who are keen to tour the site and sample some of the famous beer which has been brewed here since the Middle Ages. Each year, more than 100,000 hectoliters of beer are produced here and sold throughout Germany and worldwide, apart from the famous winter beer. The monks decide what volume of beer to produce and where to deliver it. The brewing process and the treatment of the visitors are left in the capable hands of their staff.

Time now to settle down and put the Bavarian reputation for sociability to the test: "Excuse me, is this seat free?" I ask. A quick nod implies I've been accepted. I lay my wooden tray on the table and take a seat on the bench. Here visitors serve themselves. A liter of winter beer and a portion of pork knuckles together are quite weighty. In the summer, the outside terraces provide seating for almost 2,000 people. Huge quantities of sausages and pork knuckles are cooked here, not to mention the enormous volume of beer.

Visitors can choose from a large variety of beers, which take a direct route to the taps in the beer garden. Thousands of liters of beer are consumed on any given day. Many visitors choose to bring a sample crate home with them. The sale of beer is the monastery's main source of revenue.

The mild and spicy winter beer cannot be taken home in bottles. It is available exclusively at the monastery brewery from November 11 until March 19, marking the period between the Catholic feasts of St Martin and St Joseph.

"Beer should taste of beer," explains master brewer Alexander Reiss. That is why the monastery has remained loyal to the 1516 purity law. As well as the key ingredients of dark malt, water and aromatic hops, brewing winter beer requires a great deal of patience and experience.

Smiling, Reiss emphasizes that the beer here is produced according to the proper Bavarian tradition. It involves mashing small amounts of crushed malt and water. This process is repeated several times, which gives the beer its malty taste. The maturation process takes six weeks. The winter beer can then be enjoyed in its freshest and purest form. With an alcohol content of just over 4 percent, the winter beer is relatively mild. An Andechs Doppelbock in comparison has an alcohol content of more than 7 percent.

The Andechs Monastery beer garden is not the kind of place for an all-night bender. It officially closes at 8 p.m. but most visitors – full of beer and pork knuckles – leave well before that. The early closing time is also a mark of respect for the monastic lifestyle. By 8 p.m., evening prayers are already in full swing and the morning prayers just a few hours away. The phrase "Ora et labora" ("pray and work") applies to the way of life here. While many paths lead to the monastery, for the monks, that mantra represents the one true path to God.