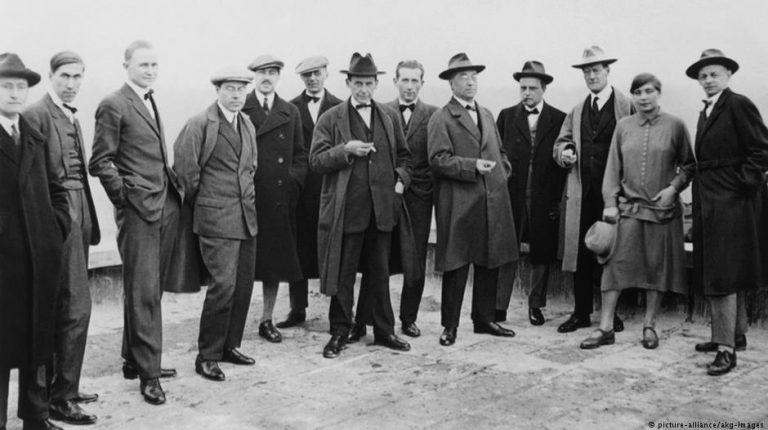 They were the children of their time. But what did the Bauhaus artists surrounding founder Walter Gropius want? And what has remained of their ideas? As the official Bauhaus anniversary kicks off, here’s an overview.When Walter Gropius launched the "Staatliches Bauhaus in Weimar" in 1919, no one could have imagined how revolutionary his ideas would become — from the synthesis of art, industry and craftsmanship, to modern architecture, to the formulation of a uniform stylistic language. With the formula "form follows function," Gropius turned out to be a revolutionary. Bauhaus products were to take on simple, unadorned forms.

The development leading up to Bauhaus puts it in proper perspective. At the end of the 19th century, Germany aimed to replace the British as the leading economic power in Europe. Industrial production methods and craftsmanship were spilling over from the island. The Prussian schools of arts and crafts, until then purely artistically oriented, were inspired by the English model and set up workshops. Contemporary artists such as Peter Behrens and Henry van de Velde took over the management of the arts and crafts schools in Düsseldorf and Weimar.

German design for the world

Well-designed industrial goods were an important economic factor. Word got around, and in 1907 the "Deutscher Werkbund" (German Association of Craftsmen) was founded in Munich. German products were supposed to stand out on the world market by way of "good design" and the best "functionality and justice paid to the materials."

Large companies such as Bahlsen and AEG had their entire product ranges and architecture designed by artists of the Werkbund. Their hope: a triumphal procession of German design.

The economy was booming and national awareness began to grow. But the First World War posed its threats. A culture-critical, reformist counter-movement was then born. One of its masterminds in art was Walter Gropius. The young architect had already made a name for himself with bold, modern architectural designs, and he also penned plenty of texts on design theory.

After the war, Gropius replaced Henry van de Velde as director of the "Grand Ducal Saxon College of Fine Arts" and seized an opportunity: He created the most modern and controversial art school of the 1920s — the "Staatliches Bauhaus in Weimar" (State Bauhaus in Weimar).

A cathedral for the Bauhaus manifesto

Teachers here were not called professors, but "masters." They included renowned artists such as Lyonel Feininger, Wassily Kandinsky, Gerhard Marcks and Paul Klee. Later, Bauhaus graduates joined up as young masters. Guest lecturers and speakers completed the comprehensive education of Bauhaus students. The title of the Bauhaus manifesto was adorned with Lyonel Feininger's Cathedral, a woodcut showing where the journey was headed: Craft and art form a unity.

As a Bauhaus man from the very start, painter Lyonel Feininger ran the printers' shop. Soon after, a portfolio of Feininger's woodcuts appeared — the very first Bauhaus publication. His works at Bauhaus turned Feininger into one of the most important artists of classic modernism. His works began to be shown in numerous exhibitions — from Berlin's Kronprinzenpalais to New York's Museum of Modern Art. Feininger fled from the Nazis, who had branded his works as "degenerate," and emigrated to the US in 1937.

Gerhard Marcks, a sculptor and graphic artist, stepped onto the Bauhaus stage in 1919. Gropius appointed him as master of form in the ceramics workshop. Under Marcks' influence, experimental ceramic vessels were formed and — as technological advances were made — the first prototypes for serial production were created. Many well-known pottery products stemmed from the Bauhaus ceramic workshop — such as the Sintrax coffee machine (1924). Marcks left the Bauhaus in 1924.

Meanwhile, Oskar Schlemmer had taken up a master position in Weimar. The painter, sculptor and stage designer initially managed the Bauhaus workshop for murals, later also the workshop for wood and stone sculpture, and at the end led the stage design workshop. He created stage designs in which his "figurines," odd-looking costumed bodies, danced. In his works, which the Nazis deemed "degenerate," he explored the position of the human figure in space. Schlemmer remained loyal to Bauhaus for 12 years. He died an impoverished man shortly before the end of the war.

First as a student, later as a young master, Marcel Breuer likewise worked at the Bauhaus. He was the first furniture designer to use steel pipes to manufacture chairs and tables. From 1925 to 1928, he ran the furniture workshop, also known as the carpentry workshop. Not only his first chair design from 1925 is considered a design classic today, but also his Piscator Table.

Josef Albers' artistic talent convinced Gropius to such an extent that he appointed him young master even before his journeyman's examination. As head of the preliminary course, Albers developed a trend-setting method of art education. In 1925, he moved with the Bauhaus to Dessau and married Annelise Fleischmann, later known as Bauhaus artist Anni Albers. In 1932, Josef celebrated his first solo exhibition of glass works. After the closure of the Bauhaus by the Nazis in 1933, Albers and his wife Anni fled to the USA.

Wilhelm Wagenfeld also began his studies at the Bauhaus in Weimar. His very first design also became his most famous: a simple opal-glass lampshade accompanied by a nickel-plated steel shaft. Wagenfeld's WA24 lamp became a design icon. Bauhaus and design lovers still buy them today as retro-editions created by the Tecnolumen company.

Laszlo Moholy-Nagy, head of the metal courses, among other things, recognized Marianne Brandt's talent very early. At his recommendation, she began studying in the male-dominated metal workshop — and became more successful than many of her fellow students. Brandt's everyday metal objects are still trademark of the Dessau Bauhaus today. Many of her designs went into serial production. Some of her ashtrays, coffee and tea services and lamps are still produced today as design classics in unchanged form, making Marianne Brandt one of Bauhaus' most famous artists.

Finally, Herbert Bayer also shaped the image of Dessau's Bauhaus. The advertising typography he developed greatly increased the popularity of the school of art and design. Bayer spent four years at the Bauhaus as a student before passing on his knowledge to the students as a young master from 1925 to 1928. Even today, typographers and printers still appreciate Bayer's universal lowercase alphabet as a timelessly modern advertising design.