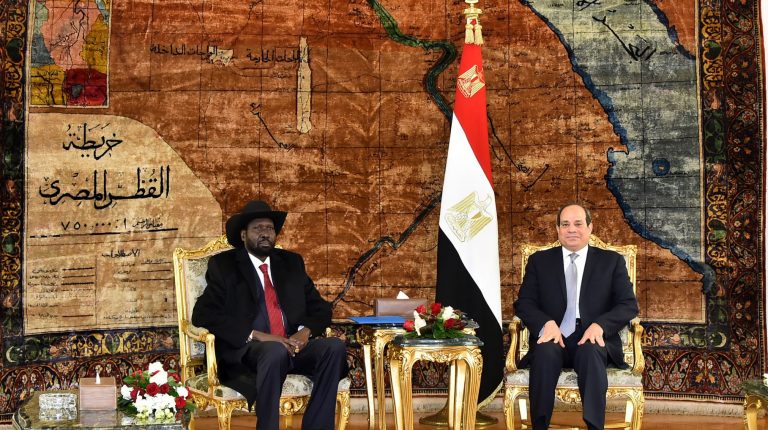 Egypt is fervid to support the stability and security of the people of southern Sudan and to strengthen relations between the two countries at all levels, said President Abdel Fattah Al-Sisi during a joint press conference with South Sudan’s President Salva Kiir.

Kiir arrived in Cairo on Wednesday for a two-day visit, local media reported.

Al-Sisi said that relations between Egypt and South Sudan are currently witnessing an unprecedented prosperity in various aspects of cooperation, without forgetting that Egypt was one of the first supporters of the nascent state of Southern Sudan and will always be its fraternal supporter.

The Egyptian president said that discussions reflected the determination of the two countries to propel the level of bilateral relations and drive them to greater horizons, to reach the level of strategic partnership, so that they can achieve the optimal development of the opportunities of economic and investment cooperation available between both countries.

The joint press conference followed once the two leaders held talks on a wide range of issues in the Nile Basin countries as well as negotiations over Ethiopia’s Grand Renaissance Dam, which Egypt fears could diminish its supply of Nile water, however, it is supported by Sudan.

In this context, President Sisi conveyed to the people of southern Sudan that Egypt will always be the guarantor and advocate in the peace-building, reconstruction, stabilisation and development efforts.

He also expressed Egypt’s commitment to provide all forms of political and technical support and access to the full implementation of the Peace Agreement, as well as enhancing joint cooperation in the education, health, agriculture and irrigation sectors through the existing mechanisms in this regard.

The two leaders met in September in Beijing during the Forum on China-Africa Cooperation 2018.

Egypt was second to acknowledge independence of South Sudan: Al-Sisi