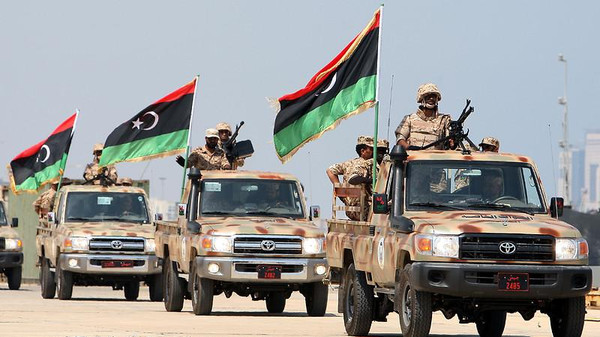 The Libyan National Army (LNA), led by Commander Khalifa Haftar, announced on Friday that it killed five militants believed to be affiliated to terrorist organisations in Libya.

The army’s spokesperson, Ahmed Al-Mismari, said that the five killed militants included Abdel Moneim Al-Hassnawi, who is known as Abou Talha, and the commander of the Al-Qaeda organisation in east Libya, and Egyptian militant Abdullah Al-Desouky, as well as Al-Mahdi Danqo.

According to Al-Mismari, the five militants were killed during a raid of ‘Operation Al-Karama’s’ forces near the town of Sabha. He stated that the Egyptian militant was among the group of Egyptian terrorists, which is led by Hisham Al-Ashmawy, and who was arrested in Libya early in October last year.

Al-Mismari added that Abou Talha was a dangerous terrorist who was engaged in terror activities in Syria and Iraq, as well as the attack on the “oil crescent”, which is a coastal home-area to most of Libya’s oil export terminals. Al-Mahdi Danqo was the one responsible for transferring terrorists from Derna to other places in Libya.

The other two killed militants are still not identified by the forces. Al-Mismari stressed that the LNA will carry out numerous operations within the coming days, in order to target militants belonging to the Islamic State group in south Libya.

Moreover, the Ministry of Health, affiliated to the UN-recognised government, announced on Friday that 13 individuals were killed, while 52 were wounded in the clashes which took place in Tripoli between different armed groups.

Since 2011, violence has broken out in Libya when a popular uprising ended with the ousting and death of former President Muammar Gaddafi. Since the ousting of Gaddafi, the country has been divided between rival governments and parliaments in the east and west. The security deterioration in Libya allowed several armed groups to spread and rule different parts of Libya.