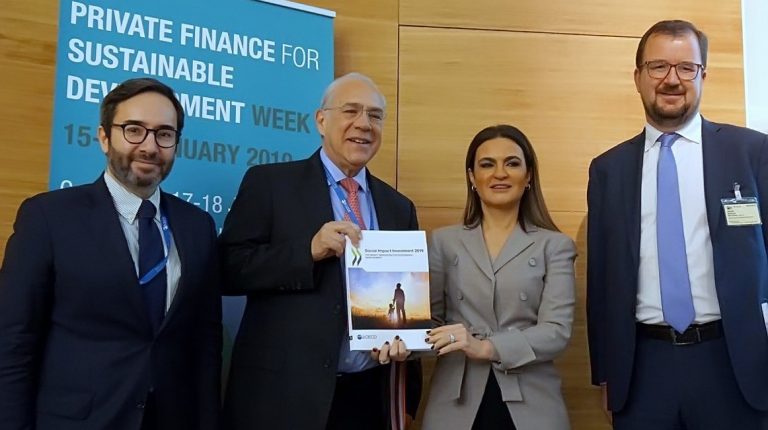 The Secretary General of the Organisation for Economic Cooperation and Development (OECD), Jose Angel Gurria, praised Egypt’s development of the private sector and the country’s ambitious economic reforms over the past four years, according to a Saturday statement by the Ministry of Investment and International Cooperation.

The Minister of Investment, Sahar Nasr, met with Gurria in Paris, on the sidelines of the Private Finance for Sustainable Development (PF4SD) Conference, organised by the OECD, where both delivered speeches.

Egypt’s economic reforms aim to achieve inclusive growth which can provide opportunities for all the stakeholders to effectively participate in the county’s development plans, mentioned Gurria.

He stressed the organisation’s keenness to communicate with its development partners and the private sector to support projects in Egypt that will achieve social and environmental impacts besides achieving financial gains.

Egypt’s recent legislative reforms have made the business climate suitable to attract more investments, he added.

During her speech, Nasr affirmed the vital role played by the private sector in achieving the goals of sustainable development at the national and international levels, ensuring Egypt’s commitment to work toward achieving equal and equitable economic and social development by involving all stakeholders in the development process and strengthening partnerships between the government, the private sector, and civil society.

Nasr referred to the reforms adopted by the government to create an encouraging environment for the private sector to take part in the development process, especially the legislative reforms which had a direct impact on improving the investment climate.

The minister affirmed that the country’s incentives to encourage the contribution of the private sector to development, including tax incentives of 30% to 50% for investments in national projects, in areas most in need, labour-intensive projects, and SMEs, affirming the government’s encouragement of social responsibility sectors in private companies.

Nasr said that President Abdel Fattah Al-Sisi’s presidency of the African Union in 2019 will encourage attracting more investments into Egypt, and to the neediest people in the African continent.

Egypt’s investment map was launched in cooperation with various ministries and agencies to include geographic and sectoral investment opportunities across Egypt to support businesspersons to invest in the areas most in need, said Nasr.

The Investors Services Centre was developed to include about 66 representatives from different ministries, added Nasr, affirming the activation of the electronic signature in the new system of establishing companies in the light of her ministry’s efforts to facilitate obtaining investment services.

Topics: environment OECD The Secretary General of the Organisation for Economic Cooperation and Development