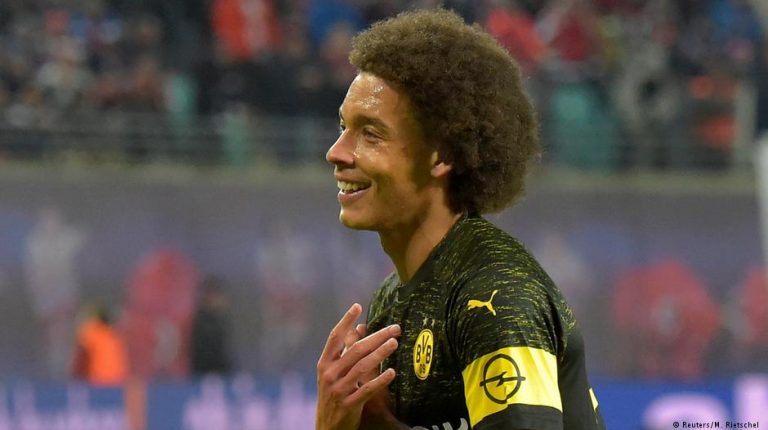 Borussia Dortmund picked up a huge win on the road in a vital examination of their title credentials. The leaders were without Marco Reus but Axel Witsel filled the void in special fashion.If Borussia Dortmund are to go on and claim their first Bundesliga title in seven years, they will look back on this freezing night in Leipzig as one of the key games that got them there.

With Marco Reus injured and Bayern Munich reapplying the pressure on by winning on Friday night, Dortmund traveled to face a team that had not suffered a single league defeat at home this season. The challenge could scarcely have been greater, the stakes rarely higher.

The absence of Reus was not only a blow for his scoring record but also his role as Lucien Favre's eyes and ears on the field, and Dortmund were in real need of someone to step into that void and lead them to victory in their first game of 2019.

Enter Axel Witsel. A man for the big occasion and with the kind of experience under his belt that Dortmund, for all their qualities, don't have much of. The Belgian was the matchwinner here, lashing in a 19th minute opener that proved the only goal of the game. Witsel reeled away in delight, literally jumping for joy. It was the kind of finish Reus would have been proud of.

But that was merely the precursor to the kind of individual display that will make Michael Zorc smile. RB Leipzig created several decent openings but lacked the cutting the edge to level the game, which would have just about been deserved on the balance of play. Marcel Sabitzer's 74th minute chance – a shot straight at Roman Bürki after he was teed up by Timo Werner – was as close as the hosts came on a night when they fluffed their lines.

Much of the reason Leipzig couldn't find a way through was because Witsel was putting himself in the line of fire. His crucial block shortly after the half-hour mark stopped what would have been a tricky effort for Bürki to keep out. The Belgian was there again just before halftime, doing just enough to put off Werner as he tried to bend one in. Witsel is like a robot vacuum cleaner, quietly going about his business of cleaning up while everyone else goes about theirs.

But it wasn't just the headers, tackles or crucial interceptions that marked this out as such a fine display by Witsel. It was the 30-year-old's game management and calming influence, with the ball, without the ball and on his teammates that made the decisive difference. Just as Sergio Busquets and Fernandinho have made it an art form, Witsel also recognizes when he needs to break up the opponent's rhythm with the odd foul, delving just enough into the spectrum of the dark arts without making the referee take action.

Witsel wasn't alone in putting in a shift for Dortmund. Jadon Sancho was lively, Mario Götze was industrious, Julian Weigl impressive at center back, and Bürki, despite a horrendous blunder that almost resulted in a Leipzig goal, made some key stops.

Dortmund are a better team when Reus is playing and this wasn't their most fluid display of the season, but it was a vital victory at a place where few teams walk away with all three points. When the end-of-season DVD goes on sale in the Dortmund club shop in the summer, this game will definitely feature.