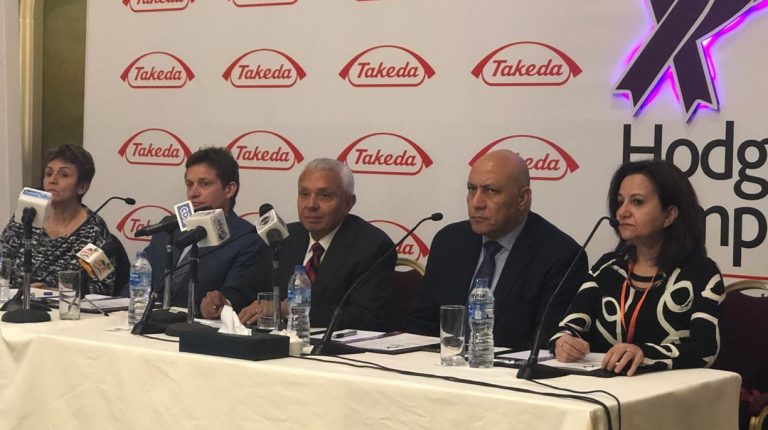 The meetings consisted of a regional summit which was conducted on the 17th of January and it was followed by a Centre of Excellence in the Bone Marrow Transplantation Unit of the Air force Specialised Hospital on the 18th of January.

World’s leading experts from Germany, Denmark, Spain, and different Arab and African countries along with our Egyptian experts attended the two meetings.

The summit on the 17th of January was a scientific platform to discuss the latest updates about Hodgkin lymphoma disease and its management in different stages to exchange different scientific standards of medical practice.

Moreover, the second day, 18th of January, was a scientific forum to exchange experiences of the Centre of Excellence for Bone Marrow Transplantation in cooperation with the Air force Specialized Hospital, to increase the efficiency of the treatment of the Egyptian patient, which is the primary goal of Takeda.

Former president of Cairo University and pioneer of “Bone Marrow Transplant” in Egypt, Dr Hossam Kamel, confirmed that Hodgkin lymphoma can be detected and treated in its early stages, especially in view of recent developments by relying on targeted therapy, immunotherapy, and marrow transplant operations, adding that the world is heading toward establishing standards and recommendations on how to ration the use of chemotherapy in the treatment of this disease in order to avoid its negative side effects.

“These scientific events are a great opportunity to learn about the latest international medical research to address this disease, as well as to identify the vision of European, American and Egyptian medical schools for treatment methods,” said Dr Martin Hutchings, the consultant of blood diseases at Copenhagen University Hospital in Denmark.

Director of the Middle East and North Africa, Takeda Medical Department, Dr Iman Gamal added that the programme aims to raise the level of medical services provided to Egyptian patients from diagnosis to treatment and follow-up. She clarified that the scientific platform conducted on January 17 is in cooperation with the Egyptian Haemato-oncology Group (EHOG) which will honour Dr Ayman Mekkawy for his media efforts to increase health awareness among Egyptian society through one of the leading satellite channels.