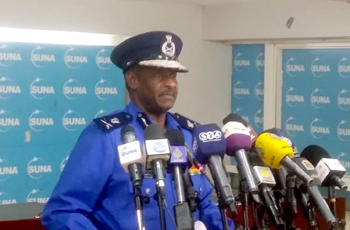 Two people were killed during protests in Khartoum on Thursday, amid denies of Sudanese police of using violence to disperse the demonstrations.

Spokesperson of the Sudanese police Hesham Mohamed Abdel Raheem said that the police did not use live bullets at any location, and even in the area of the attacks, only tear gas was fired.

The Central Medical Committee said in a statement on Thursday that a doctor named Abu Bakr Abdel Hamid and a14-year-old teenager named Mohamed Obaid were shot by gunfire in the protest area.

Abdel Rahim said that the rumours about the death of the teenager are unsound.

On Thursday, the Security Council, the United States, France, and Britain appealed to the Sudanese authorities to respect the rights of peaceful demonstrators.

Also, Britain criticised what it called “unacceptable” use of lethal force by security forces against demonstrators and called for accountability for those killed.

Sudan’s UN envoy Omar Dahab said the government was “fully committed to giving citizens an opportunity to peacefully express their views,” but said they were acting “to protect the lives of people and public property against vandalism, and against all forms of violence by some demonstrators.”

Khartoum and other cities have seen several demonstrations over the past week, and police forces confronted them with tear gas.

Thousands of anti-government protesters took to the streets of Khartoum, the Sudanese capital, and other cities across the country on 19 December against the economic conditions in Sudan which have been deteriorating in the past recent months, particularly after the currency devaluation which took place earlier, causing prices to surge.