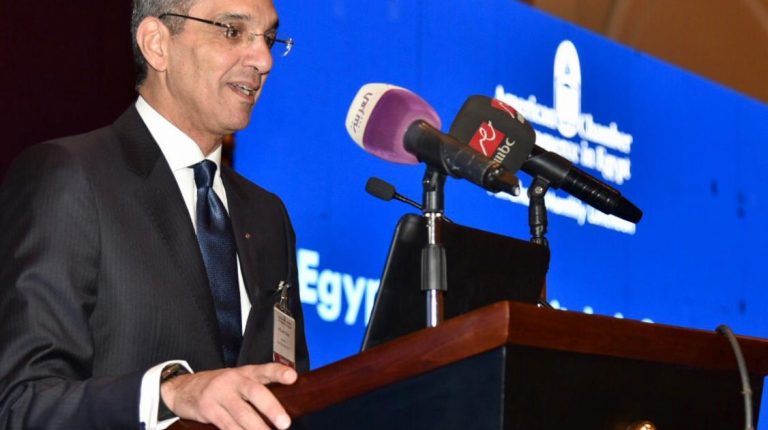 The Ministry of Communications and Information Technology (MCIT), Amr Talaat, targets to increase the sector’s contribution in to the Gross Domestic Production (GDP) over the next three years to beyond 5% compared to 3.2% in the last fiscal year (FY) 2017 while it aims to approach 4% of the GDP by the end of the current FY 2018/19.

The minister added over his speech at a conference entitled “Egypt goes digital, a committed nation,” organised by the American Chamber of Commerce in Egypt (AmCham) on Sunday, that the sector has grown by 14% in the last FY 2017/18 and achieved 18.4% in the first quarter (Q1) of FY 2018/19 while the ministry targets the sector to grow by 15% for the whole FY 2018/19.

Talaat said that his ministry is implementing the MCIT strategy over the next three years that stands on two main pillars which are human development and digital transformation.

Furthermore, Talaat noted that his ministry, in collaboration with the ministry of higher education, will launch the first artificial intelligence technology faculty, during the next academic year.

Additionally, the minister added that there is a plan to boost Egypt’s digital exports and create 100,000 jobs in the business of Information Communication Technology (ICT), explaining that the market enjoys high stability and the value created in ICT services is very high.

“We are focusing on capacity building, and we are trying to boost growth to encourage innovation and entrepreneurship,” mentioned the minister, adding that he aims to improve the telecom infrastructure through working on legislative reforms for branding Egypt as prominent destination for ICT.

“We act together under one umbrella, to rebuild with the Egyptian citizens’ skills,” said the minister, revealing the plans for the establishment of the Knowledge City in the heart of the New Capital with 4 buildings.

Moreover, the minister noted that the MCIT is launching several initiatives to improve the ICT skills of the Egyptian youth even before graduation, adding that there is a new initiative targeting the training of 10,000 Arab and African learners, 100 of whom will be helped to have their own start-ups in the digital gaming sector over the coming three years.

“For the first time, Sharm El Sheikh will host the meetings of The International Telecommunication Union next fall. It is the first time to be held out of Geneva, Switzerland,” acknowledged the minister.

In addition, the minister said that the marriage official or “Maazoon” will document marriages through tablets not with the traditional books in the marriage ceremonies.

For his part, the AmCham President, Tarek Tawfik, affirmed the role of the ICT sector in boosting the Egyptian economy especially that the Egyptian government implements firm digitalisation and transformation plans for addressing bureaucracy.

Sylvia Menassa, AmCham’s CEO, revealed that the AmCham Egypt will organise their upcoming events including an event organized on Monday to support the goal of an inclusive market for employment while the taxation committee will host the chairperson of the Taxation Authority on Wednesday.

“On 13 February, we will host the chairperson of the New and Renewable Energy Authority in Egypt, Mohammed El Khayat,” she mentioned.