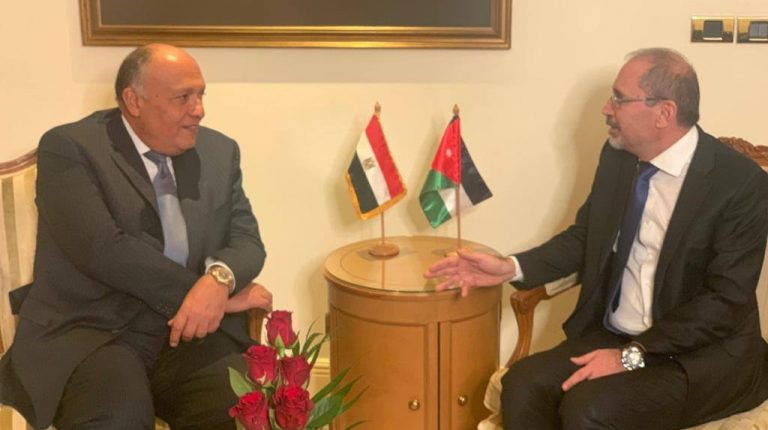 The Minister of Foreign Affairs, Sameh Shoukry, met with his Jordanian counterpart, Ayman Al-Safadi, during the Arab Economic Summit in Beirut, Lebanon, on Saturday.

Shoukry is representing Egypt in the summit, which was launched on Sunday. Yet, the majority of the Arab leaders were absent during the inauguration of the summit. Leaders from Lebanon, Qatar, and Mauritania were the only ones present.

The meeting addressed the ways of building on the outcomes of President Abdel Fattah Al-Sisi’s last visit to Jordan, in order to increase the bilateral cooperation between the two countries on regional and international issues.

The two ministers also discussed the latest updates of the Palestinian issue. They stressed the importance of reaching the two-state solution, and supporting the legitimate rights of the Palestinian people, as well as reaching an internal Palestinian reconciliation. They also renewed the call for keeping the integrity and unity of Syria, in addition to resuming the negotiations between the parties which are involved in the crisis.

A week ago, Al-Sisi visited Amman and met with King Abdullah II bin Al-Hussein, the King of Jordan. They discussed boosting bilateral relations between Cairo and Amman, as well as the regional and international issues of mutual concern.

Al-Sisi and Abdullah also discussed the mutual efforts for countering terrorism, while stressing the essence of supporting the international efforts which aim to combat terrorism, within the framework of a comprehensive strategy to fight global terrorism.