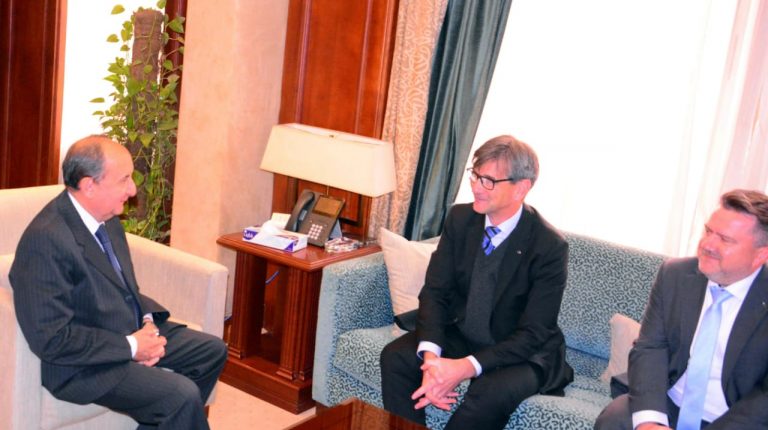 The Minister of Trade and Industry, Amr Nassar, has welcomed the CEO and President of Mercedes-Benz Egypt,  Thomas Zorn, in order to discuss the company’s plan to resume its activities in the Egyptian market, two days after the company’s announcement to resume its business in the country.

During the meeting, Mercedes-Benz called for the formation of a technical team from the ministry of trade and industry in order to follow-up on the implementation phases of the company’s project, and to provide the necessary technical assistance during all the project’s steps.

In this regard, Nassar pointed out that a technical team will be formed at the highest level of senior officials from the ministry, in order to ensure the acceleration of the implementation process, calling on the German company to work on and to complete the start of the production phases as soon as possible.

Moreover, the minister noted that the Egyptian market is well-positioned to become a major vehicle manufacturing and assembly centre in the Middle East and Africa. Nassar further elaborated that the ministry opened diverse channels of communication with the main players in the field of car manufacturing on the global level, in order to attract major international companies and brands to be present in the Egyptian market, and to inject new investments both in the field of automotive and feeding industries.

For his part, Zorn praised the Egyptian interest in the automotive industry, which is represented in the government’s encouragement for international companies to invest in its local market. Zorn added that the company looks forward to injecting more investments into the automotive sector in the Egyptian market.

The company’s decision to resume its operations in Egypt came after President Abdel Fattah Al Sisi received Markus Schäfer, a member of the divisional board and head of the production department at Mercedes-Benz in early December.