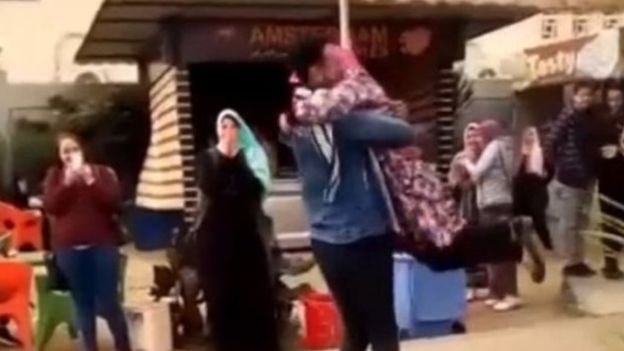 A video of a young female student hugging her male colleague completely disturbed Al-Azhar University, where the girl is studying, leading to them expelling her, until, at the last minute, the Grand Imam, Ahmed Al-Tayeb, intervened to overturn the decision.

The scene, which appeared to be a marriage proposal, showed a young man carrying a bouquet of flowers before a young woman. He kneeled and then hugged her. The video raised sharp controversy after going viral on social media earlier this month.

Al-Azhar University announced on Saturday last week that it expelled its student after she appeared in the video hugging a male, demonstrating that she violated the universities regulations and present a “bad image,” of the Al-Azhar University.

According to the Article No 124 of the universities’ regulations law, the university has the right to expel or prevent students from taking exams, if it’s proven they have violated “the universities’ laws and traditions,” and committed “acts which oppose public morality.” 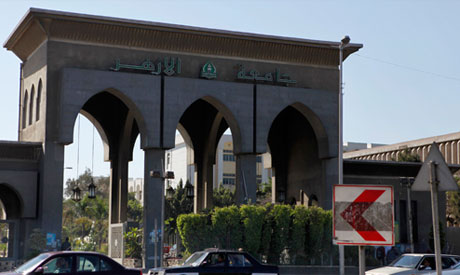 The young woman studies Arabic Language at Al-Azhar’s University branch in Al-Mansoura city, however, the video was taken at Al-Mansoura University, where her colleague studies. He also was expelled by his university.

A day following of the decision, Al-Tayeb intervened to suspend it. However, he did not call for the abolishment of the punishment but instead mitigated it to prevent her from attending the exams of the first term.

Recently, Al-Tayeb was featured in media coverage and op-eds as “the father” who preferred advice and guidance than severe punishment. Others suggest that real changes have actually taken place within the long-established religious institution and its administrative bodies.

“I cannot see Al-Tayeb’s move anything other than a humanitarian act which saved the girl’s and the boy’s futures,” Intsar El-Saed, a lawyer and the head of Cairo Centre for Development and Law (CCD) informed Daily News Egypt.

El-Saed noted that after the video spread, the student was enraged because she is a woman. “The society which harshly denounced the girl’s act is the same one which always stands idly by before any sexual harassment or rape incident. I see no crime in the couple’s behaviour.”

El-Saed argued that the recent distinct moves, which support women, are taken by Al-Tayeb, not by the Azhar institution itself. “It is Al-Tayeb, not Al-Azhar,” noting that the institution still maintains its old values as it initially resorted to a severe punishment against the girl.

Nearly five months ago, Al-Azhar released a significant statement that criminalised sexual harassment regardless of women’s outfit. Al-Azhar denounced verbal and physical harassment, asserting that such incidents are unacceptable in any society or culture.

The statement did not blame women for being subjected to sexual abuse as usual or for wearing revealing clothes or not putting on a veil. The statement was considered as a outstanding gain for women, a long-awaited one.

Al-Azhar’s stance came following a wide division among social media users over a viral video featuring a young Egyptian man approaching a woman in one of the Fifth Settlement streets in New Cairo. Some see the situation as an act of sexual harassment; others defended the man noting that it was just a flirtation.

Egyptian women often report facing difficulties over not wearing the veil or abandoning it. Sexual harassment is among those challenges.

Along the same line, the Ṣawt Al-Azhar newspaper featured in one of its issues Christian women and others without the veil, in a move that was widely appreciated and seen as the establishment of principles of accepting the other.

“I believe it was the first time in Al-Azhar’s history to feature unveiled women. It seems that there are two conflicting approaches within the institution, the radical and enlightened one. I believe that Al-Tayeb represents the enlightened approach” El-Saed opinionated.

Meanwhile, El-Saed emphasised the need to renew the religious discourse, noting that any call for such a move is always met by confrontation. The lawyer argued that religious scholars are afraid of changing Islamic fundamentals despite the fact that, El-Saed clarified; most of those explanations are “independent discretions.”

“Yes, we live in a parental society where women are not enjoying their fundamental rights. We cannot deny this. But this situation is different as we can never receive the Grand Imam’s move from this perspective,” El-Saed noted.

El-Saed added, “I believe it is a small victory that we should appreciate. Al-Tayeb saved the student’s educational future and this is a respectable move. Egypt is slowly changing, and society is starting to accept things it did not accept before. Some of those changes came as results of the 25th January Revolution and others due to the power of social media and the Internet where various discussions are held over vital topics.”

From a different perspective, Amr Ezzat, a researcher and officer for the “Freedom of Religion and Belief Programme” at the Egyptian Initiative for Personal Rights, pointed out that al-Tayeb’s moves, including dealing with the Al-Azhar’s student, are representing political approach aimed at satisfying all parties.

“I cannot say the Grand Imam is enlightened or that there is a large enlightened approach inside the Al-Azhar institution. However, there are some people within the institution and its bodies that call themselves ‘moderate’ or ‘reasonable’”, and those often face challenges inside,” Ezzat told DNE.

Ezzat added, “Al-Tayeb is sending political messages with his stances that al-Azhar University is accepting all different ideologies, so he often takes such soft decisions. However, in the case of the female student, he did not reject the concept of punishment, but he resorted to mitigate the sanction.”

Ezzat argued that this is the role of the AL-Azhar, institution which supports the government, and represents a religious discourse that is consistent with the state vision. “The difference you view between the university’s decision and Al-Tayeb’s stances is normal, as the Grand Imam is a politician, while the university is an administrative body which has executive responsibilities,” Ezzat noted.

Meanwhile, Ezzat demonstrated that some articles of the Egyptian universities regulations; including Al-Azhar University, reportedly impose sanctions against students or teachers over their different behaviour or “inappropriate acts” even if those so-called actions are taken outside the campuses.

Ezzat added that in most cases of suspending or expelling some of the al-Azhar teachers, Al-Tayeb did not freeze those decisions, but instead he called for mitigating them.

“In my opinion, he is trying to play a political role to satisfy the traditional approach inside the institution, which asserts the need for punishment, but takes stances that show that Al-Azhar is not excluding people of different ideologies,” Ezzat concluded.