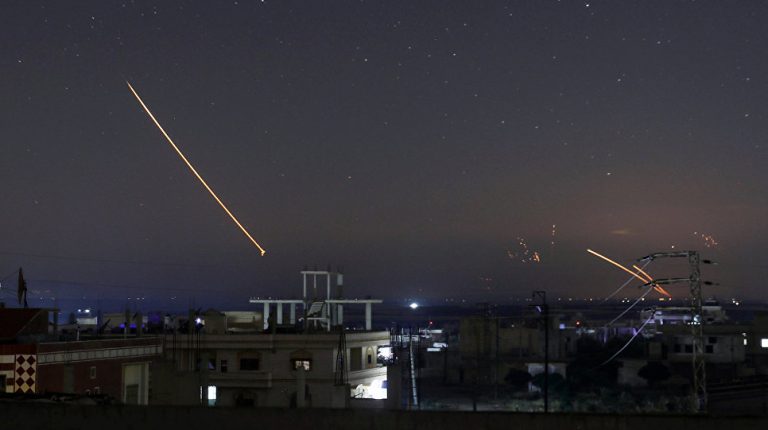 The Israeli forces said on Sunday night that it has attacked Iranian targets in Syria in the largest Israeli attack on Syria, since the civil war erupted in 2011. Israel also warned the Syrian armed forces from attempting to harm the “Israeli forces or territory.”

According to statements from the Israeli army, it attacked sites of the Iranian Quds Force, which conducts operations outside Iran on behalf of the Iranian Revolutionary Guards.

The sites which were targeted are munition storages, a military area located in the Damascus International Airport, an Iranian intelligence site, and an Iranian military training camp.

The Israeli attack came hours after the Iron Dome system intercepted a missile launched from Syria, following a strike on an airport south of Damascus on Sunday. The missile attack was attributed to Israel.

Israel accused the Iranian Quds Force which operates in Syria of launching “a surface-to-surface rocket from Syria aimed at Israel’s Golan Heights.”

However, Israel claimed that it targeted Iranian sites, while the Russian Defence Control Centre in Syria said that four Syrian soldiers were killed, and six others were wounded in the attack.

“During our strike, dozens of Syrian surface-to-air missiles were launched, despite clear warnings to avoid such fire. In response, we targeted several of the Syrian armed forces’ aerial defence batteries,” said the Israeli army on its official Twitter account.

Following the Israeli attack, the Head of the Iranian air forces, Brigadier General Aziz Nasirzadeh, said that his forces are ready to fight Israel “and eliminate it from the Earth.”

“The young people in the air force are fully ready and impatient to confront the Zionist regime, and eliminate it from the Earth,” Nasirzadeh stated to the Iranian state media.

On the other hand, the Syrian air defence said that it has destroyed most of the “hostile targets”, according to state media.