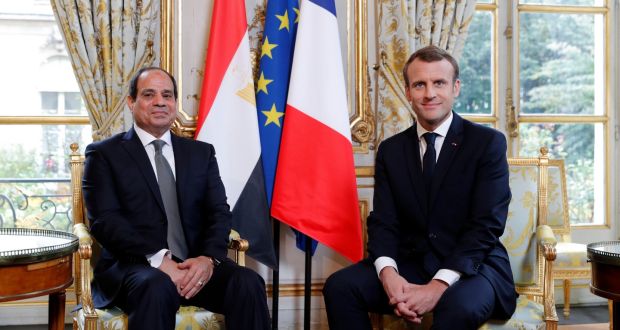 President Abdel Fattah Al-Sisi received on Monday a call from his French counterpart, Emmanuel Macron, in which they discussed a number of topics of bilateral relations, according to the presidency’s statement.

During the meeting, Al-Sisi and Macron discussed the ways of strengthening their relations at all levels, and the latest developments of the regional issues of mutual interests.

Al-Sisi expressed Egypt’s aspiration to boost the existing cooperation with France, and to continue to develop it in the various fields, highlighting that it already witnessed a steady growth in the recent period in many fields, in a way which contributed to the common interests of the two countries and peoples.

From his part, the French President stressed his country’s interest to strengthen the two countries’ historical and friendly relations, especially in light of Egypt’s important and pivotal role in preserving the security and stability in the Middle East.

This comes a few days before Macron’s planned visit to the country on 28 January. The French Minister of the Economy and Finance, Bruno Le Maire, arrived to Egypt on 20 January to prepare for the French President’s visit.

The visit will mark the first one of the French president’s, since he assumed office in 2017.In October 2017, President Abdel-Fattah Al-Sisi visited France and discussed with Macron the joint efforts in order to combat terrorism, the Middle East peace process, and the situation in Libya. During the visit, both presidents attended the signing of 16 memorandums of understandings in the fields of renewable and traditional energy, infrastructure, social security, and transportation, as well as met with a number of French military manufacturing companies.