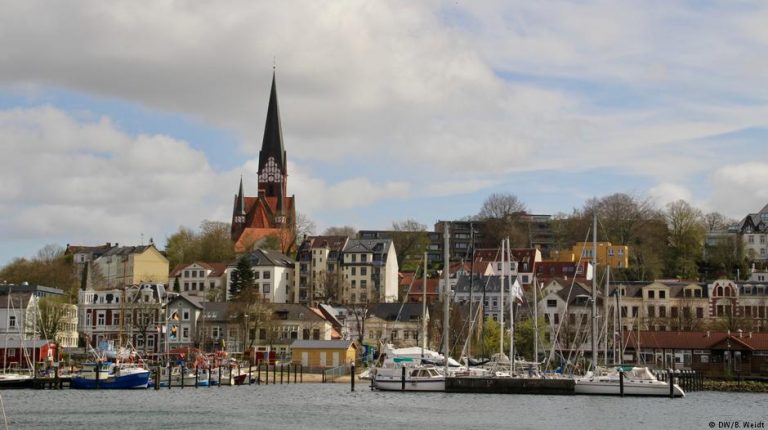 Flensburg, in northern Germany, near the border to Denmark, is known for its Scandinavian flair. It’s less well known for the rum that has been produced here for centuries. What a pity — it’s very good indeed."Nicht schnacken, Kopf in Nacken," says Malte to me as I stand in the port watching the ships. It means roughly, "No talking, drink up," and it's a common north German toast. He pours rum into a small glass and holds it out to me. It tastes sweet and spicy, and it's really warming. When the glass is empty, he announces we need a refill.

66-year-old Malte used to go to sea as a sailor. Now he stands on the quay with a bottle and fishing rod and catches herring. We walk to Johannsen's Rumhaus, one of the last traditional distilleries in Flensburg. Its company shop on Marienstrasse is said to have the best rum blend. "Blend" doesn't sound very good, but this tastes good, and it has a long history behind it: in 1885 Germans began to import rum from islands in the Caribbean, and in Flensburg good money could be earned from it. But soon it was being taxed according to quantity, so from then on the sailors were forced to deliver a concentrate so the producers could sell as much as before. To do so they had to thin the rum: to make the imported liquor with its 80 percent alcohol content drinkable, it was thinned with water and blended with grain alcohol. That process has survived to this day, and the spicy taste of the blend is now better than its reputation might suggest.

Once a Danish colony

Flensburg is the only German city with a genuine rum tradition. It used to belong to Denmark, and Denmark had colonies: the Danish West Indies, consisting of the islands St. Thomas, St. John and St. Croix in the Caribbean. The ships brought the valuable tipple in large casks to the port of Flensburg, which was larger and more important than that of Copenhagen at the time. What flourished in the 18th century was interrupted by war a hundred years later. The city was ceded by Denmark to Prussia and Austria. In that way, the Flensburg distilleries lost their rum suppliers. They needed an equivalent replacement, so they started going to Jamaica to fill the gap.

Matures in casks for up to 14 years

Martin Johannsen's great-great grandfather lived through all that. Martin is the fourth generation of his family to run the oldest rum house in the city. Behind the small shop in the Marienburg, a medieval merchants' warehouse in the old town, the spicy scent of rum wafts from dark storerooms, mixed with the fine aromas of vanilla and smoky wood. The delivery from the Caribbean comes once a year, two to three thousand liters at a time. With a winch on the storehouse, the containers are hauled up and their contents transferred to oak casks. When it arrives, the rum has a maturation period of between five and seven years in the tropical climate of Jamaica behind it. Actually it's already mellow and flavorful, but for a Flensburg rum it's not yet good enough, the young man explains. It has to mature for twelve to fourteen years before it can be bottled.

On the way back to the port, Malte and I take a detour through Oluf-Samson-Gang. Although the narrow lane is no longer what it once was, it is a reminder of the times when the sailors traded their earnings for nights of sinful pleasure. In the late nineteen-sixties, 70 women were working as prostitutes in Flensburg's red light district. Just under four years ago, the last two closed their establishments, in buildings parts of which dated from the 17th century, and which have now been restored. It was high time to spruce up these historical properties, especially when the facade of House Number 3 collapsed, providing a "spectacular" scene for passers-by. Apart from such minor incidents, Flensburg is structurally in good shape, because the city sustained only minimal damage during World War II. The market square, city gate and churches are in good condition.

From time immemorial, Flensburg has attracted adventurers, free spirits, sailors, boat builders and students, who like to live in the still affordable courtyards in the city center. The yards contain skate shops, tailoring and alterations studios, galleries and discos. Occasionally, from the open windows, the sounds of Santiano can be heard, a band all of whose members come from Flensburg and whose music mixes rock with folk and sea shanties. Their songs are full of joie de vivre, unbridled yearning and wild dreams. The song "Es gibt nur Wasser (There's Only Water)" is very popular here because one of its lyrics translates as "We need rum, rum, rum – or we'll die of thirst." "That's not quite true," Malte adds. "There's also the famous Flensburg beer. But for me, there's nothing better than good rum!"