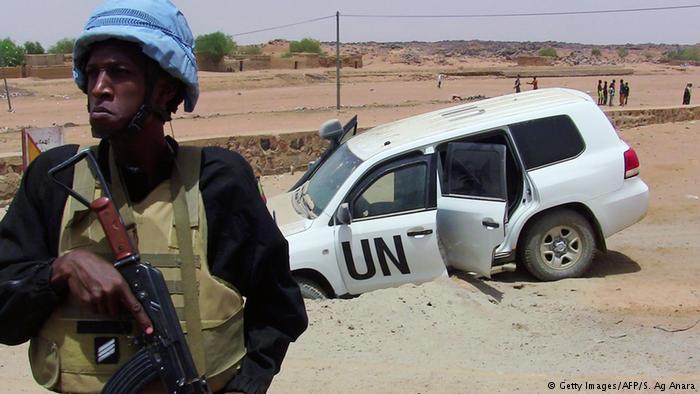 An attack on the UN mission in Mali has left 10 peacekeepers dead and at least 25 injured.

An Al-Qaida-linked Islamist group has claimed responsibility for an attack that killed 10 UN peacekeepers from Chad in the north of Mali on Sunday.

In a statement posted on messaging platform Telegram, the Nusrat al-Islam wal Muslimeen group said the attack was a response to Chadian President Idriss Deby’s revival of diplomatic relations with Israel.

At least 25 others were injured in the attack on the UN camp, which was one of the deadliest attacks against MINUSMA, the UN mission in Mali.

The gunmen struck early Sunday at the Aguelhok base 200km (125 miles) north of Kidal and toward the border with Algeria, according to a source close to the MINUSMA mission.

“MINUSMA forces responded robustly and a number of assailants were killed,” UN spokesperson Stephane Dujarric said without specifying the toll.

UN Secretary-General Antonio Guterres strongly condemned what he described as a “complex attack” on the camp in Aguelhok, in Kidal region and called for the perpetrators to be brought to justice.

Mahamat Saleh Annadif, the UN envoy for Mali, condemned what he called a “vile and criminal” attack.

“Peacekeepers of the MINUSMA force at Aguelhok fought off a sophisticated attack by assailants who arrived on several armed vehicles,” he said in a statement.

The attack “illustrates the determination of the terrorists to sow chaos. It demands a robust, immediate and concerted response from all forces to destroy the peril of terrorism in the Sahel,” Mahamat Saleh Annadif added.

On Sunday, France’s Defence Minister Florence Parly told French radio that the G5 Sahel anti-jihadist force in the region was resuming its operations.

Operations were suspended after an attack on their headquarters in mid-2018. The G5 force comprises contingents from Mali, Mauritania, Niger, Burkina Faso, and Chad.

Some 13,000 peacekeepers are deployed in Mali as part of the UN mission, which was established after Islamist militias seized the north of the country in 2012. The insurgents were pushed back by French troops in 2013.

Early this month, 37 civilians belonging to the Fulani ethnic group were killed in an attack on a village in central Mali. The attackers, “armed men dressed like traditional dozo hunters” raided the village of Koulogon, located in the central Mopti region. Some of the victims were children.

Mali’s semiarid and desert regions have been used as a base by extreme Islamist militant groups with ties to al-Qaida and the so-called ‘Islamic State.’ The country has been in turmoil since Tuareg rebels and a loose alliance of Islamist insurgents took over large parts of its north in 2012, which prompted former colonial power France to intervene and help Malian forces push back the following year.