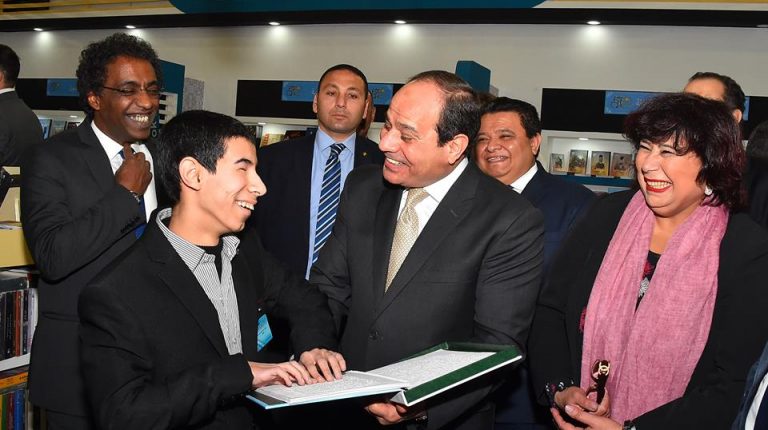 For the first time, Al-Sisi witnessed the opening of the Middle East’s largest book fair, taking place from 23 January until 5 February, with the attendance of the Minister of Culture, Inas Abdel Dayem.

Bassam Rady, the spokesperson for the Egyptian presidency, stated that Al-Sisi’s participation reflects the state’s keenness to spread culture awareness among citizens, within a larger plan to develop human resources, according to the state-owned publication, Al-Ahram.

Rady added that the president’s participation deepens Egypt’s pivotal role as “a expanding cultural beacon in the Middle East.”

For her side, Abdel Dayem stated in a press release that such cultural events reflect Egypt’s focus to support the publishing industry as a soft power in fighting extremism and enlightening people.

The minister pointed out that publishers hailed the fair’s new location, describing it as an “honourable image of Egypt.”

The Arab League is the guest of honour of the 50th Cairo International Book Fair, which was dedicated to commemorate Egyptian veteran writer Tharwat Okasha and prominent literator Suhair al-Qalamawi.

Thirty-five countries are participating in the 2019 edition. The fair provides 723 exhibition halls for a total of 1,274 exhibitors. The new venue was built on an area of 24.000 sqm.