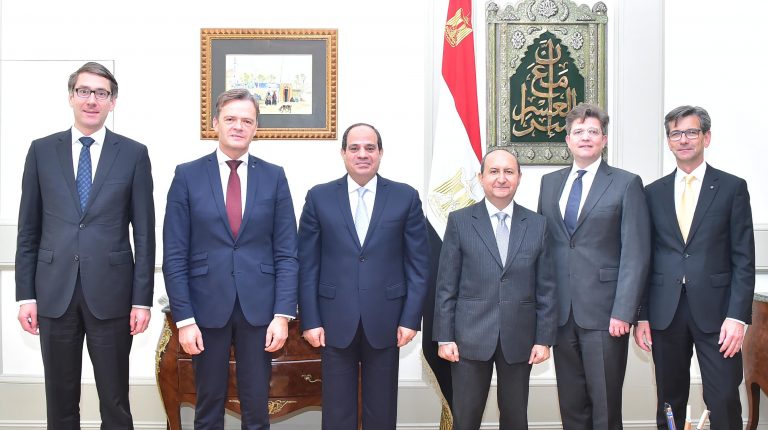 It seems that 2019 will be a year of achievements and will represent a new breakthrough in the automotive sector in Egypt. Since the first day of the year, many car brands have seen a decline in prices by 2%-30%, after the application of the Egyptian-European partnership titled ‘Zero Customs Agreement’. Afterwards, before the first month of the year comes to an end, the giant European automobile manufacturer, Mercedes-Benz, announced the re-establishing of its factory in Egypt through a local partner, and in close cooperation with the Egyptian government.

This news was followed by the meeting between Markus Schäfer, member of the divisional board of Mercedes-Benz Cars, and who is responsible for production and supply chain management, with Egyptian President Abdel Fattah Al-Sisi, and Prime Minister Mostafa Madbouly, in which all obstacles facing Mercedes-Benz in Egypt were removed. Following the meeting, Schäfer said that Egypt is a competitive and an attractive location for production and logistics support, adding that Mercedes-Benz will be able to expand its global market through Egypt.

The future of the automotive industry and the local market in Egypt seems to be waiting for many developments, as well as the introduction of modern technology. Mercedes-Benz indicated that it is also conducting talks with the Egyptian government on other projects related to the state infrastructure, the New Administrative Capital, and smart cities to be built. The company also offered its expertise on modern mobility, electric transport and electric vehicles, as well as self-driving cars.

He further elaborated that the opening of this factory in Egypt confirms the state’s support for attracting and protecting foreign investments. He expressed his high hopes for the new factory’s huge production to be exported, and will not only work to meet local demand, in addition to establishing other feeding industries’ plants, which would have a great impact on the transfer of feeder technology industries to major companies.

Mostafa also pointed out that the establishment of major automotive factories, such as the Mercedes-Benz’s factory, provides many benefits to Egypt, as it reintegrates the utilisation of modern technology into cars. These benefits are even more highlighted as Mercedes-Benz is participating in negotiations on infrastructural projects in the New Administrative Capital, and also on smart cities in order to introduce modern cars, electric cars, and self-driving cars.

Moreover, Mostafa highlighted that the economic reforms, which took place in Egypt, are beginning to reap their rewards, explaining that the state has carried out many projects which attract investment, such as the establishment of the New Suez Canal project and the development of ports, which will attract foreign investment.

Tamer Shafei, the head of the Spare Parts Industries Division at the Chamber of Engineering Industries, said that the return of Mercedes-Benz to manufacture in Egypt will have a significant and a positive impact on the Egyptian car industry. He also pointed out that the name of Mercedes-Benz is mighty and a heavyweight in the world of cars, and its presence in Egypt will further improve the image of the country before the world, and this step reflects the degree of stability and economic improvement which Egypt is moving toward.

He also added that the government is moving in the right direction in order to attract foreign investments, in addition to the encouragement of the local industries, pointing out that the state is following several programmes to promote the national industry, such as programmes to launch new industrial zones, as well as specialised industrial zones.

Furthermore, he pointed out that the most efficient actions taken by the government towards the local industries, is the speed of issuing licences, adding that the issuance of new licences for the feeding industries and local manufacturing plants has become very easy, elaborating that the government should complete its mission and develop a law and a strategy for the automotive industry in Egypt.

Meanwhile, Osama Aboul Magd, president of the Egyptian Automotive Dealers Association, said that the return of the Mercedes-Benz factory in Egypt is an unprecedented step, and a testament to the success of the economic reform policy adopted by the government and President Abdel Fattah Al-Sisi, through the Central Bank of Egypt.

He praised the role played by President Al-Sisi in solving the Mercedes-Benz crisis in Egypt, and removing all the obstacles which previously prevented the company’s factories from returning to Egypt, after a meeting with Schäfer.

Abul Magd stated, “This step means that the foreign investor has regained the confidence in the Egyptian economy again. This was missing in the past years, since Mercedes-Benz’s customers in Egypt make up only 7% of the market demand. Mercedes-Benz has a complete strategy which will make Egypt a central base in Africa and the Middle East,” further continuing, “This will take the Egyptian industry to a better place and force the similar industries to develop. The factory will encourage other giant car companies to come to Egypt, creating a competitive spirit which will benefit the Egyptian economy and the local market.”

He added that dealing with the industry policies is going in the right direction, and must be strongly supported during the coming period, noting that the return of Mercedes-Benz represents a new breakthrough in the Egyptian-European cooperation, especially after the application of the ‘Zero Customs Agreement.’

On the impact of the new Mercedes-Benz factory on the automotive feeding industries in Egypt, Abul Magd explained that a large factory such as Mercedes-Benz’s comes with a large production line. Therefore, it is possible to create a group of factories feeding the main factory, under the supervision of the German factory, as they do not accept any interreference in the details of their production.

Finally, Abul Magd concluded by saying that the industrial investment is automatically followed by a commercial investment, adding that the strategy developed by a giant company such as Mercedes-Benz will take Egypt to a different economic and commercial status.

Raafat Masrouga, the honorary head of the Automotive Marketing Information Council and the former president of the Engineering Automotive Manufacturing Company, said that the return of the Mercedes-Benz plant to resume its activities in Egypt represents a leap in the Egyptian automotive industry, as well as a positive step for President Abdel Fattah Al-Sisi, who was able to convince the German company to work in Egypt again.

He stressed the importance of creating a new Mercedes-Benz plant at the moment, especially after the abolition of custom duties on European cars and the low prices of the manufactured and assembled cars in Europe, which has negatively impacted local manufacturing, and is no longer profitable.

Masrouga pointed out that this factory will make Egypt a centre for the transfer of German products to Africa, the Middle East, and the Gulf countries, while expecting to rely on Mercedes-Benz in Egypt in order to manufacture products which are made by factories in the West Atlantic.

Furthermore, Mercedes-Benz will come to Egypt with new ideas and advanced technology in the field of electric cars, which will advance Egypt’s automotive sector and the different industries.

Mercedes Benz previously issued a statement in May 2015, announcing that Mercedes-Benz’s assembly of passenger cars in the local market would cease as it has become economically inefficient on the long run. This decision coincided with global changes in the models produced by the company, before returning to announce in January 2019 the establishment of a new factory in Egypt.