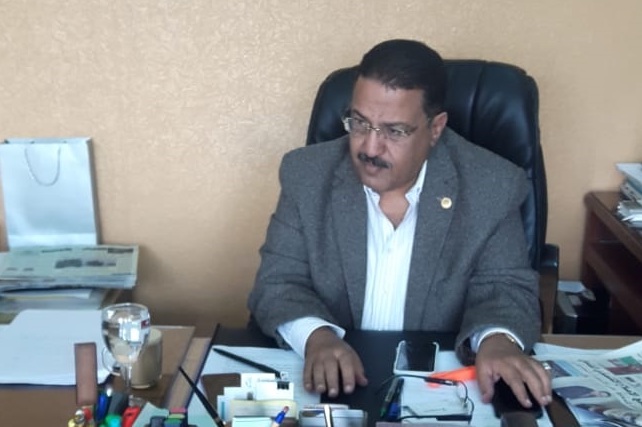 In his interview with Daily News Egypt, Head of Egyptian Publishers Association (EPA), Chairperson of Dar Al Maarf’s board, the oldest publishing house in Egypt, Sa’ed Abdo unveiled the situation of the publishing industry in Egypt and the challenges it is facing.

He clarified how the industry is affected by the floatation of the Egyptian pound, and how 2016 and 2017 were lean years for both the industry and publishers themselves.

Abdo projected that 2019 will be better for the industry as the economic condition is going to stabilise.

What is your association’s evaluation for the publishing industry volume in Egypt?

Could you clarify the types of challenges that Egypt’s publishing industry is facing?

The publishing industry, especially the book market, is still facing numerous challenges, which are threatening it, including economic challenges, among others stemming from the market itself.

Do you mean the issue of illegally copied books?

Forged books is the biggest challenge ever that the book market in Egypt is suffering from. It not only violates the Intellectual Property (IP) Law, but also it steals the copyrights of the authors and publishers which absolutely cause significant losses for both of them. Also, it completely threatens book investments in the publishing industry sector. Forged copies caused about 50% in losses for authors and publication houses.

So, it threatens existing investments

Because it negatively affects these investment revenues. In addition, people who commit this crime are also publishing forged copies of foreign publications even those related to the science and academic fields. So it is really a serious problem. Noteworthy, over 500,000 forged copies were seized during 2018.

How will the Cairo International Book Fair make an annual difference for the industry?

This fair is the most important opportunity for the publishing industry in Egypt to be sustained and to promote all kinds of publications, especially since the industry suffered significantly following the floatation of the Egyptian pound and its aftermath. So it is a serious problem for authors and publishers when forged publications are placed on the market for a quarter than its actual price. It has a lethal impact on the industry, harming Egypt’s reputation in foreign markets.

Does it mean that book forgery is hard to beat?

The serious dilemma in this regard is that publication forgery has become a profession for many people. It guarantees easy money, as all they need is to own a printing machine, tracking bestsellers in bookstores, then they can print thousands of forged copies pummelling the original publication’s success in the market. Moreover, printing houses themselves are currently seizing the opportunity and are printing illegal copies of the original publications behind the author’s back, paid in advance.

What is the number of printing presses in the market?

About 500 printing presses, including illegal ones.

We already have an Intellectual Property Act, is it not enough, as a legislation, to curb the spread of book forgery?

Unfortunately, the legislation does not protect the industry from this critical situation, and it completely fails to control it. It penalises those who committed this crime with a fine of up to EGP 5,000, and in event of a reoccurrence the fine is doubled to reach EGP 10,000. In addition, confiscation of the material is seized, which actually happened.

Then what are your association’s efforts to counter this threat?

We have already prepared a new draft that imposes a harsher punishment. The fine reaches EGP 100,000. The fine is determined according to the inflation rate.

Do you think that it is enough to cope with this serious situation?

Of course it is not enough. We need some severe measures to be taken in order to face this challenge, including raising the audience’s awareness of this harmful phenomenon by conducting awareness campaigns to clarify how forged publications are destroying the publishing industry. In addition, authors and publishers themselves should not be overrated in book pricing, as readers will search for cheaper options, especially since the purchasing power of all customers has been cut by half or more. The legislation structure consummates the industry’s protection , but it needs to be strictly applied.

Talking about the publishing industry, what actions should be taken to help it thrive?

Concerned bodies should to offer all facilities to open new libraries, and to allow the establishment of at least one library in every new housing project that is established. In addition, purchasing publications at reasonable prices as it is an important point to sell and promote books and all publications. The industry also needs severe laws to be released as soon as possible. And I wish all publishing industry inputs to be duty-free, as this industry totally depends on imported components, so the price of publications is set at reasonable prices.

And what about publication shipping which is always facing problems?

These procedures also need to be more flexible. We need to ease the measures of shipping publications inside and outside Egypt. Shipping companies in Egypt deal with publications that have not been sold in any book fairs as re-exported shipments, not as returns, which place substantial pressure on all publishers, unlike the same conditions in other countries. These actions are enough to revive the industry.

How was the industry affected by the floatation of the Egyptian pound which was applied in November 2016?

It caused significant hikes in all of the industry’s components. Production costs increased threefold compared to the period before November 2016. Costs and prices increased by 120% during the past two years. New titles decreased by between 30% and 40%, while profits rates declined by about 50%.

Could this effect spill over into 2019?

The situation is currently fairly more stable. There is another challenge that does not help the market to feel that which is the exit of the main five markets which Egypt exports to 2011 including Iraq, Libya, Yemen, and Syria, as the Arab Spring uprisings caused a significant loss. In addition, the floatation of the Sudanese pound affected the presence of Egyptian publications there, as Egyptian publishers occupy 80% of total publishers in Sudan.

After the absence of the main markets as a destination of the Egyptian publications due to Arab Spring uprisings, which countries have replaced them in sequence?

Can the new wave in this industry which relates to e-books and audio books compensate it for its losses?

E-books and audio books are the new wave in maximising the revenues of publishing industry all over the world, and Egypt must exploit that to support the local publishing industry. But, we should be careful to protect our content so as to not be illegally exploited, and all publishing platforms need severe legislations to protect authors’ copyrights.

What is the required cost to produce an audio book?

But, do you not think it is too expensive? Can the authors make a profits this way?

I do not think so, as they can make their profits through subscription fees that are permitted by the platform which published it.

When can we say that Egypt is involved in the digital publishing era?

Within two years from now, but, the awareness of the importance of this new wave will significantly hasten the entry of e-publishing, including audio books.

Whilst preparing for the Cairo International Book Fair, a significant controversy sparked over sponsoring such an important annual event. Could the 50th edition grab a sponsor?

We already contracted with an advertising agency, for the first time, to sponsor the 50th edition of the Cairo International Book Fair. It will be a partial sponsorship for one year.