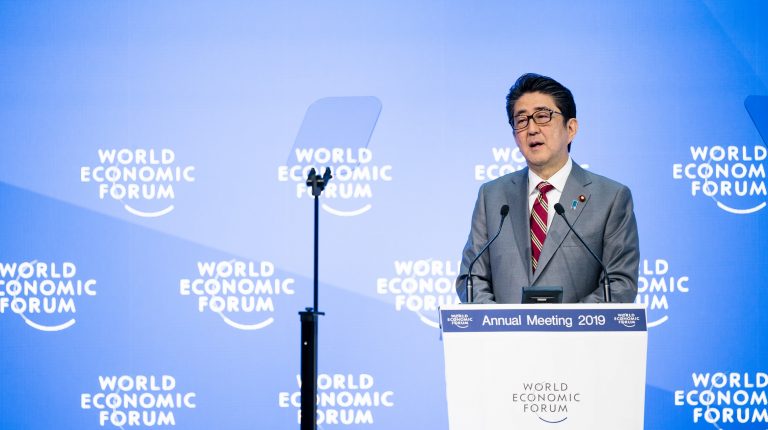 Abe added that Japan’s rapidly ageing population, was seen five years ago Japan as a “wall of despair”, yet through the focus on “womenomics” and the adoption of new legislation to allow more foreign workers, allowed the country’s metamorphosis.

“Hope is the most important factor for growth. A country ageing can still grow as a ‘hope-driven’ economy,” Abe announced. “We are not widening the gap, we are narrowing it.”

The positive impact of the new policies started to become visible, as japan’s push to increase the number of women entering the workforce – “womenomics” – has driven participation rates up to a record high of 67%, surpassing that of the US, and boosting the number of women in the labour force by 2m.

Moreover, under Abe’s government, Japan’s GDP has grown by 10.9%, and 98 out of every 100 college graduates is employed, while child poverty rates have plummeted.

The Japanese Prime Minister explained that his government is encouraging investments, to make sure that such growth is sustainable.

Japan’s new vision “Society 5.0”, foresee a human-centred society that balances economic advancement with the resolution of social problems by a system that highly integrates cyberspace and physical space.

“In Society 5.0, it is no longer capital but data that connects and drives everything, helping to fill the gap between the rich and the less privileged. Services of medicine and education, from elementary to tertiary, will reach small villages in the sub-Saharan region,” he explained, “Our task is obvious. We must make data the great gap buster.” He added.