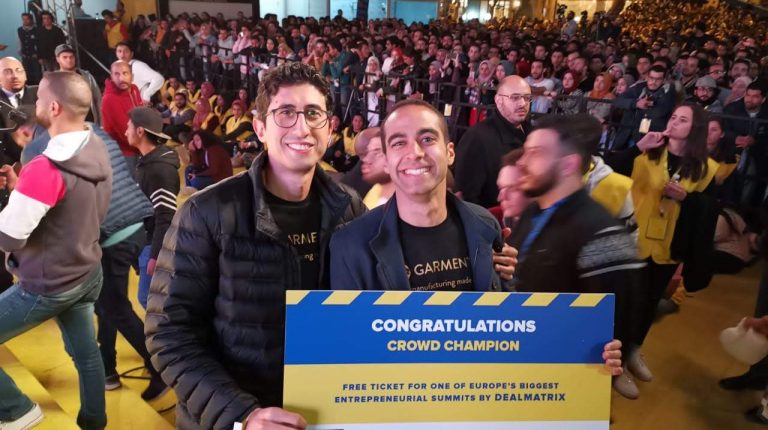 Creative, passionate and clever are some of the numerous qualities of the participants in Egypt’s 2019 Pitch Competition, which is the first phase of The AIM Startup. The winners will participate in the AIM Startup in Dubai next April. The 2019 edition focuses on digitisation to empower startups and small and medium-sized enterprises.

From 21 startups, a jury consisted from the AIM Startup team and other experts, had to select five winners. The jury includes Programme Manager of Electronics Industry at ITIDA Yasser Abdel Bary, Entrepreneurship Development Senior Advisor at USAID SEED Project, Mohamed Sultan, Adjunct Professor at the American University in Cairo, Ramez Daoud, and of Entrepreneurship Centre Director at the Arab Academy for Science, Wael El Desouki Bedda.

Yasser Abdel Bary informed Daily news Egypt that the jury members were impressed with the work of the startups, “they came well-prepared and have a clear plan to grow and profit. Yet, we had to choose five startups according to the AIM Startup’s criteria” he added.

AIM Startup was launched in 2017 as an initiative of the UAE Ministry of Economy to connect promising startups with investors and business partners from other parts of the world.

The winning startups of this year tackled many issues such as a device that allows travellers to use their SIM card for making or receiving calls and SMSs with zero roaming fees; a recycling machine for beverage cans and plastic bottles, and a smart internet of things (IoT) platform that tracks garment production lines.

DNE interviewed the five winners, and asked them about their next move, the obstacles they faced ,and what inspired to create their startups.

Amr Elgalby, the founder of VoxEra, was travelling on a business trip to Georgia, where he needed to keep calling and sending SMSs to his clients in Egypt. Once he came back to the country, he had to pay a huge sum of money to cover his roaming fees. Elgalby is a voice over IP engineer, so he thought of a solution to reduce the fees, and ended up with VoxEra, the device with its four flashing indicator lights and connectivity ports, and looks a little like a home router. Once a SIM card is inserted into its designated rear slot, the VoxEra works its magic: all calls placed while the user is travelling are charged at domestic rates.

Amr Elraiany, the business developer of VoxEra, rendered the presentation before the jury, as Elgalby was in China following the production process of the device. Elraiany told DNE that the biggest issue they had to deal with was manufacturing the device because it was the team’s first experience in manufacturing a hardware.

“We are not an alternative to telecom providers, we just offer a solution to low roaming fees. Let’s say that we may take a little bit of the profit they make, because when people use VoxEra, they will not pay for roaming fees.”

The startup is now working on the second pitch to deliver their pre-orders. The next move is to expand the market targeting the Gulf area, which has a large group of foreigners. As a first phase, VoxEra accepted a startup in Chile, so the team will be in Chile for some months to further develop the product.

Elraiany highlighted that the startup at this point is handling the service very well and covering the production line, yet getting increased investments into the firm will give it a bigger and faster chance to enter more markets.

Garment IO is a smart IoT platform tailored to boost the productivity of the garment manufacturing industry. It is a plug and play software and hardware solution providing garment factory managers and owners a complete overview on production processes, worker performance, and production cost calculations, all the way down to the transaction details, real-time, and is accessible online.

Mahmoud Sabae, co-founder of Garment IO, believes that the system gets quite a lot of data that can help decision-makers, adding “by using Garment IO, mangers in garment factories get insights on how to improve productivity. We take care of quality issues, maintenance, planning, and costs.”

The Founder of Garment IO, Ahmed Nounou, previously had a garment factory, and when he met Sabae, they discussed the issues in the garment industry, and from there they got the idea for their startup.

Garment IO helps garment manufacturers and factories track, analyse, organise, manage, and optimise their production processes. It provides the hardware and software as a service for a periodic fee that the factory pays per installed device.

The startup is only targeting the garment manufacturing industry, which is sized at $420bn in 2017 (excluding raw material), employing over 70 million employees worldwide. “We are focusing on doing one thing better than others” Sabae added.

The biggest challenge Sabae and Nounou faced was the hardware, especially importing the required electronics into Egypt, besides getting some approvals from a few government agencies. Sabae said that they will soon start selling pre-orders, “we are already functioning in terms of hardware and software, and we are planning to quickly penetrate the market, and once we establish ourselves in Egypt, we will expand globally”.

EpicVR designs and implements virtual reality arcade games, from the games themselves, operating software, exterior design and production, and required hardware. It sells the complete product to arcades and family entertainment centres.

EpicVR’s team are engineers who are passionate gamers and interested in virtual reality (VR), and when it was available for developers, they decided to make their business model of it, a profitable business out of it.

EpicVR was founded in August 2015. Aiming to deliver this amazing experience to the masses, they started focusing on creating out-of-home arcade games that are sold to game centres in Egypt and the MENA region.

DNE interviewed Ahmed Atif and Ahmad Amin, co-founders of the startup, who are focusing on their first potential market in the region, Saudi Arabia, “we showcase our product in many exhibitions, but one of the biggest challenges we faced was connecting with the owners of entertainment centres, because our model is a B2B model,” Atif said.

They managed to corporate with someone who works in the arcade industry since the 1980s, as they seek to gain clients who trust their product, “we are now present in many centres, but the number of our team is not large enough, so we aim to expand our team” Amin added.

Zeroprime, a solution for unused cans and bottles

Annoyed by the amount of rubbish in Cairo’s streets, Islam El-Refaey, founder and CEO of ZeroPrime Technologies, thought of a way to recycle the rubbish, as he has a background in aerospace and mechanical engineering, and is interested in applying technological solutions especially for social causes.

El-Refaey, who established his startup 2017, worked on designing and implementing smart sustainable city infrastructures. His first solution for the scattered city rubbish was CanBank, which is a machine that gives users different rewards of their choice in exchange for their used beverage cans or plastic bottles. The machine is available in corporates, universities, clubs, and malls to encourage them to recycle.

Furthermore, El-Refaey stressed the need for better ways to deal with waste, especially with its negative impact on the environment, “we have a bigger vision for automated waste management. Besides CanBank, there will be a product which will assist to complete the whole process of waste management” El-Refaey, said, adding “our next product will focus on oil and liquid recycling, yet we faced some obstacles, the biggest was finding a suitable and profitable business model, and hopefully the process will be easies in our next products.”

ZeroPrime is now partnering with some beverage companies to expand the business, El-Refaey added “we are now in discussions with the ministry of environment, and hopefully that will result in positive benefits. We want to change the way Egyptians deal with solid waste, and I believe that this is an achievable dream.”

WideBot is the first Arabic-focused bot builder platform that gives a tool to businesses in the MENA to build smart chatbots without coding in a few minutes, while helping them to engage with their audiences by advanced artificial intelligence (AI) to maximise conversions and increase loyalty.

Mohamed Nabil, the CEO and co-founder of WideBot, is looking to attract more clients to his platform, “we are working to improve our platform, by adding more Arabic slang terms and making it more accurate. We struggled during the developing process of our platform, because there is not a lot of data available in Arabic” Nabil said.

Next month, the tech startup will open its office in Dubai. Nabil believes they can build the most powerful AI tool that supports Arabic language, “we need some investment in our project in order to improve the team’s productivity, and hire more employees in our company” he added.