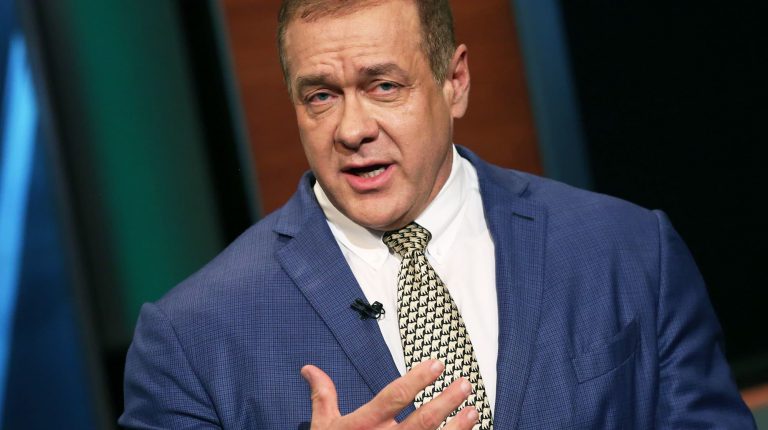 Davos– The global economy has been in turmoil in 2018, with the United States’ stock market sell-off, the slowdown of Chinese, and German economic growth, the emerging markets (EMs) crisis, monetary tightening policies adopted by the Federal Reserve-and by various central banks elsewhere-as well as the ongoing trade-war between the world’s two-largest economies.

To get a better understanding of global economy’s expected performance in the future, Daily News Egypt interviewed Scott Minerd, global chief investment officer (CIO) at Guggenheim Partners, during the World Economic Forum (WEF) annual meeting 2019, in Davos, where he gave a not-so-bleak-forecast of the global situation, and shrugged off fears of a recession in 2019.

Minerd has been an advocate of sustainable development for years, and from his perspective it means investing in safe, reliable infrastructure, fostering growth, all while protecting the environment.

During the WEF 2019, Minerd reviewed a new report, commissioned by the Guggenheim Partners and the World Wide Fund for Nature, called ‘State of Practice: Sustainability Standards for Infrastructure Investors,’ which studies different tools, approaches, standards and certifications for the sustainability of infrastructure investments.

He explained that, capital will only flow to sustainable development if it satisfied institutional investors’ mandate to generate strong and stable returns.

Minerd believe that the Arctic carries enormous economic benefits, as he estimated it will need about $1tn in infrastructure investment in the next 15 years.

Such an investment could spur development and create new jobs. Yet, Minerd has noted that the financing currently available for infrastructure falls short of what is needed, and that there are concerns about whether the benefits of future development will be fairly distributed.

And onto the interview, the transcript for which is below, lightly edited for clarity:

Do you think the global economic slowdown will continue in 2019?

I think we are seeing the peak of the global slowdown here in the first quarter of 2019, and the reason for that is twofold. In the United States, we are in the middle of a shutdown, which would be huge depressant for growth in this quarter.

However, policymakers have awakened to the issue, as the Fed in the US has announced that they are going to halt their monetary tightening policy, and personally I think they could potentially reduce interest rates if things get worse.

Meanwhile, in China, the Bank of China announced changes in their reserve requirements, which means cutting the level of cash that banks must hold as reserves, stepping up moves to lower financing costs, and can spur growth and ultimately slash interest rates. The policymakers over there have increased infrastructure spending, and are considering tax-cuts.

In Europe, Angela Merkel has already issued a statement that there should be tax-cuts, and as Germany is the largest economy in Europe, that would have a highly positive impact.

So the fact that policymakers are quickly responding to the slowdown obviously means that the world will not go into a global recession this year. Clearly, if the ongoing trade dispute between China and the US could be resolved, that would greatly help the global economy, especially for export countries, such as Germany and Europe in general.

How can the current conditions affect EMs?

EMs are getting a reprieve at the moment, with Fed going on hold, and the US dollar is weakening, which typically is good for EMs. Also, energy prices are starting to stabilise, which is beneficial for exporting countries, So I think EMs are going to do fairly well in 2019, and 2020.

How can we convince governments and investors to adopt a more sustainable model in infrastructure investments?

I think there are two ways; the first is incentives, either through subsidies, or tax incentives. We are currently working with some people in Washington D.C. – legislators – on tax incentives.

The second is boundaries, just plain rules, and regulations. For instance, black carbon is a real problem for the Arctic, when it falls on the ice it attracts more heat. So, if we are going to open the Arctic to shipping-which is currently happening-allowing ships that emit black carbon will be a major problem, To put that in perspective, 15 ships operating full-time produce more black carbon than all the automobiles in the world, and this could be fixed with regulation. For example we could implement a programme that says over the next 10 to 15 years, shipping has to move into an emission-less process-which has already started with the Japanese-who have developed electric ships that travel between Australia and Japan.

So those are ways of government intervention, but I personally think that other than to establish boundaries and incentives, governments should try to stay out of the way, and let the business community figure out the most economically desirable way to address such issues.

What about low-income countries, where usually tenders go to the lowest cost offer without other considerations, especially in Africa?

The interesting thing about sustainable infrastructure investments, that even if the project would cost more upfront, the ongoing returns on investments are much higher, I think that’s where private capital can play a role, because private capital is more interested in the long-term returns.

Africa in particular has a unique opportunity to leap frog the problems of the developed world, solar power can be easily implemented, micro-grids – local energy grids that can disconnect from the traditional grid and operate autonomously – work very effectively, and solar now is cheaper than traditional energy sources. That’s where government incentives should come into play, along with financial support from NGOs.