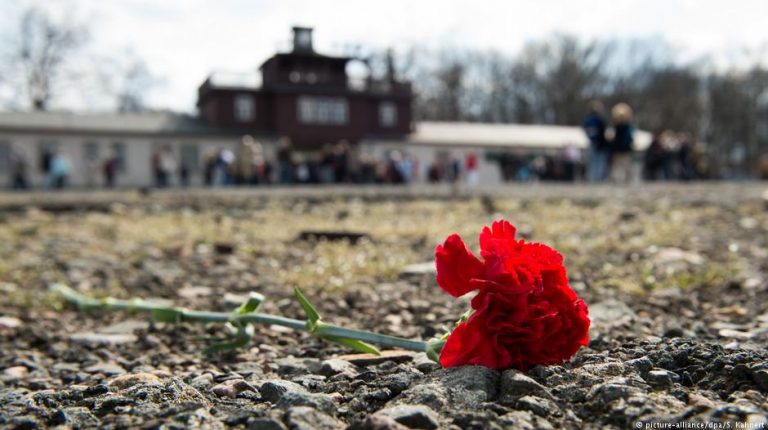 Whether in Buchenwald, Dachau or Sachsenhausen, January 27 is a solemn occasion that attracts many visitors to sites of Nazi terror. Jewish leaders warn that the day must serve to combat historical ignorance.The Holocaust Memorial in Berlin's Mitte district is open this Sunday, as it is every day for visitors from all over the world. The vast concrete memorial serves as a reminder of the suffering of the six million Jewish people who were murdered by the National Socialists. But the memorial hour, organized by the foundation that oversees the Memorial to the Murdered Jews of Europe, will take place at a much smaller monument nearby: The Memorial to the Sinti and Roma Victims of National Socialism. There is also a silent remembrance at the Memorial to Homosexuals Persecuted Under Nazism in Berlin’s Tiergarten park.

Every year on January 27, the millions of victims of the Nazi reign of terror (1933-1945) are remembered, with commemorative concerts, interviews with contemporary witnesses or guided tours of memorial sites. The date also marks the liberation of Auschwitz, the largest Nazi concentration camp, by Soviet troops in 1945.

In 2005, the UN General Assembly declared January 27 as International Holocaust Remembrance Day. It has been officially commemorated in Germany, however, since 1996.

Read more: How safe are Jews living in Germany?

Today there are around 300 memorial sites, commemorative stones or plaques at authentic Holocaust sites in Germany. Over 2.5 million people visited former concentration camps last year. In 2018, almost all facilities recorded a steady or rising number of visitors.

The largest former concentration camps in Germany continue to be important destinations for visitors from around the world. The Dachau concentration camp outside of Munich received 900,000 visitors in 2018 — a record number. The Sachsenhausen memorial north of Berlin also reported an increase to over 700,000 visitors. With 500,000 visitors, the Buchenwald Memorial near Weimar recorded such a strong increase that the facility is reaching its maximum visitor numbers, according to a spokesperson.

Read more: How secret diarists of the Warsaw Ghetto fought against Nazi lies

In the run-up to Holocaust Memorial Day, representatives of the Buchenwald Memorial said that politicians of Thuringia’s far-right Alternative for Germany (AfD) party were barred from attending Friday's wreath-laying event. The Buchenwald memorial representatives cited the AfD's continuing refusal to condemn remarks and actions by Thuringian AfD politician Björn Höcke, including calling the Holocaust memorial in Berlin a "monument of shame."

On the occasion of the International Holocaust Memorial Day, the Central Council of Jews in Germany warned of a growing historical amnesia in Germany and Europe. The lack of historical knowledge and the lack of empathy with the victims of the Shoah leads to indifference, says Josef Schuster, the council's president. He stressed that Holocaust Memorial Day events must send a clear signal against such indifference and ignorance.