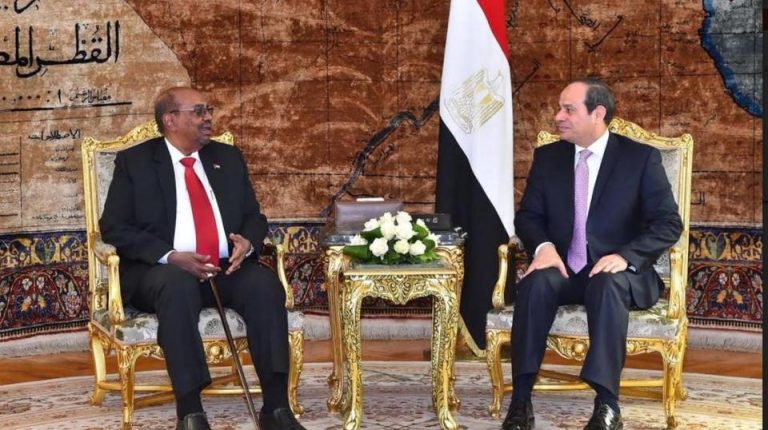 President Abdel Fattah Al-Sisi discussed bilateral relations and mutual cooperation between Egypt and Sudan with his Sudanese counterpart Omar Al-Bashir on Sunday in Cairo in Al-Bashir’s second foreign trip since the beginning of demonstrations in Sudan.

Following the meeting, the two leaders held a joint press conference. During his speech in the press conference, Al-Sisi said that the meeting addressed the mutual projects between Khartoum and Cairo such as the electricity interconnection project, as well as the negotiations of the Grand Ethiopian Renaissance Dam (GERD).

He added that Al-Bashir’s visit comes in view of the exerted efforts in the last year in numerous issues of mutual concern. Also the Egyptian-Sudanese efforts resulted in holding the meeting of the joint supreme committee which signed 12 agreements.

The meeting is the 8th summit between the two leaders.

For his part, Al-Bashir that both Al-Sisi and himself agreed on a number of economic security projects, as well as the security coordination in the Red Sea as the most important waterway globally. He added that the meeting also addressed the peace agreement in South Sudan and the situation in the Republic of Central Africa.

Al-Bashir’s first foreign visit since the eruption of protests against his rule in Sudan since 19 December 2018 was to Qatar last week. He is facing massive criticism after the economic deterioration and increase in inflation in Sudan.

In other news, President Al-Sisi received a phone call on Saturday night from the King of Bahrain Hamad Bin Eissa Al-Khalifa. They discussed bilateral relations, and the latest updates in regional issues of mutual concern.