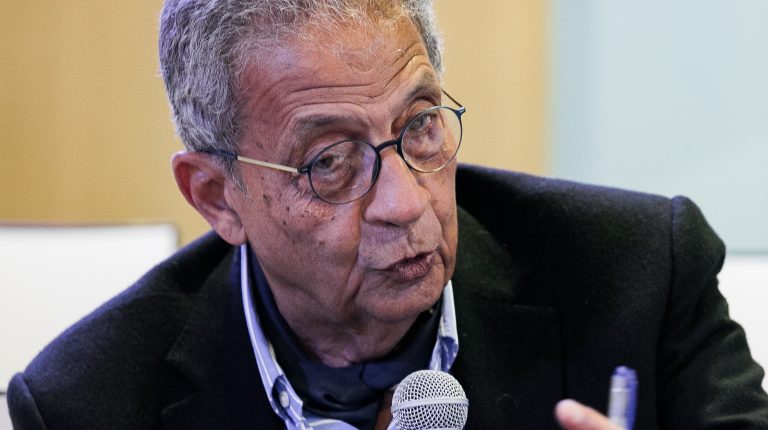 Davos- The best method to begin an Arabic active role in resolving the Syrian crisis is through holding a meeting for the Arab countries in order to discuss the Syrian matter, and to reach an agreement on the best method of action, either through a unanimous agreement or an agreement between some countries. This in order to end the lack of an Arabian stance toward Syria, prominent Egyptian former diplomat, Amr Moussa, told Daily News Egypt during the World Economic Forum annual meeting in Davos.

Moussa added that since the beginning of the Syrian conflict, Arab states should have played an active role in order to mediate and try to resolve the situation, adding that “If this had been conducted, I do not believe that the Syrian conflict would have escalated to what we are witnessing now.”

He continued, “No doubt, it is of great importance that Arab states play an influential role in the conflict, which, unfortunately, is not the case until now, as Arabs do not have a unified stance on how we should have a constructive role in order to resolve the conflict.”

From Moussa’s perspective, the reopening of some Arab embassies in Damascus, such as the UAE, and Bahrain, is drop in the ocean to end the Arab silence on the Syrian file. Currently, some talks are finally emerging on what Arab countries should do.

Furthermore, he reaffirmed his stance that if we want to keep the Syrian sovereignty and protection of its lands, we cannot just assert this when the Israelis attempt to annex the Golan Heights, and ignore this sovereignty in other cases.

Moussa stressed that we need a clear and decisive stance in order to ensure that the Syrian sovereignty will not be jeopardised, not only from the Arab countries, but from the whole world. The Golan Heights is a part of Syria, and cannot be annexed by an occupying force.

Regarding the proposed American peace plan, Moussa stated that the Egyptian and Arab view on the matter is well known, which is the Arab peace initiative proposed in Beirut in 2002, which maintains the same firm position toward the Palestinian cause.

Moussa further elaborated, “Consequently, we should not re-evaluate the matter on different grounds, as our stance is very clear, upon which we should call on every country in the world to support,” further adding, “Many countries are already showing support for the plan, and view it as a very reasonable initiative which could lead to a just and lasting peace.”

On the Libyan matter, Moussa believes that the Libyan crisis is still insurmountable and that there are plenty of foreign actors which fuelled the ongoing division. However, he hopes that Arabs can address this situation as Libya is an important Arab, African, and Mediterranean country. It is therefore essential for many countries that the situation gets under control.

He concluded that Egypt and other neighbouring countries play an integral part in the Libyan crisis, which is an essential role that they must undertake. “Yet, other countries with different and conflicting interests toward the Libyan crisis are playing a dirty role, preventing any resolution.”