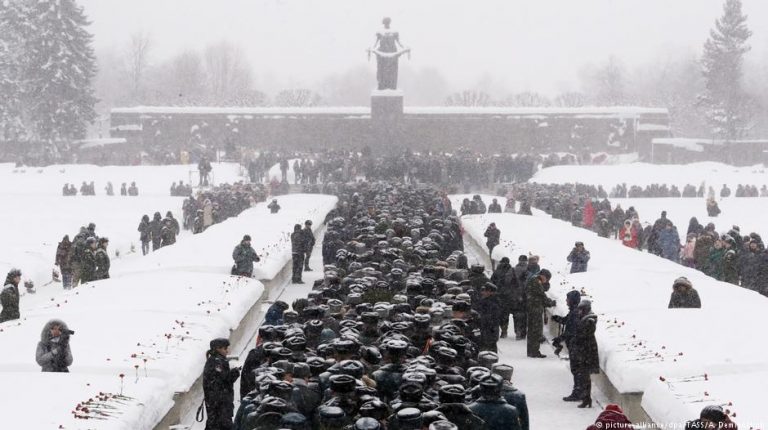 More than a million people died of hunger, cold or disease or were killed during Nazi bombardments of the city. Germany’s foreign minister has pledged €12 million for the siege’s remaining survivors.More than 2,500 soldiers and 80 military units paraded through St. Petersburg's Palace Square on Sunday as the city marked 75 years since the end of a devastating siege by Nazi German forces during World War II.

Nazi leader Adolf Hitler ordered the siege of the city, then called Leningrad, which began on September 8, 1941. At least a million residents — a third of the population — died of disease, cold, starvation or in aerial bombardments.

Germany has pledged to donate €12 million ($13.7 million) to the siege's remaining survivors.

The donation "not only shows that we are aware of our responsibility, but also it is also a signal that this may never happen again," said German Foreign Minister Heiko Maas.

Some of the money is expected to be used to modernize a hospital for Russian veterans, where some of the 108,000 war veterans and siege survivors receive treatment. The German government wants to use the rest to finance a German-Russian culture center.

"We're confident that this voluntary action will improve the quality of life of the survivors," Maas said.

Russian President Vladimir Putin was not present at the parade, but he is expected to visit a nearby cemetery and attend a memorial concert.

The Russian leader's older brother died during the siege and his mother almost died of starvation.

To mark the end of the siege, soldiers are scheduled to conduct a gun salute on Sunday evening.

DW editors send out a selection of the day's hard news and quality feature journalism. You can sign up to receive it here.