One can say with certainty that the year 2018 was an exemplary year for Egypt’s Ministry of Antiquities. With dozens of discoveries declared on a monthly basis, the year is considered a tour de force. While the success of some of the unearthed discoveries made it to the international publications’ first page, such as the tomb containing remains revealing the secret of mummification, the world still has its eyes on a immense achievement still remaining coming soon.

Despite previous announcements, the opening of the world’s biggest museums was not among the  surprises of the lucky year. The Grand Egyptian Museum (GEM) is considered one of Egypt’s most instrumental players in luring tourism back and reviving the country’s main source of income.

The mega museum will host the complete collection of Tutankhamen’s belongings for the first time in history since they were discovered. The opening was planned to take place in 2018, before it was postponed to an undisclosed date.

The project started in 2008, and with every year bringing the world closer to its opening date, people’s enthusiasm increase regarding the promised life-awaited destination they dream of having. Rumours stated that the long anticipated for opening will be held in 2019, yet they were soon denied by the decision makers.

With the aim of finding answers to the  constantly asked questions, Daily News Egypt interviewed Tarek Tawfik, the general director of the GEM to follow-up on the last updates and 2019’s plans for the museum, the transcript for which is below, lightly edited for clarity:

The GEM opening was postponed several times since it was announced the first time. So, the main question everyone is asking, when is the exact opening date set for the GEM?

There were only two proposed dates announced before: one in mid-2018 and the second is by the end of it. However, these were proposed dates for a partial opening of the museum, mainly presenting the galleries of Tutankhamen.

But the decision was taken by the Egyptian Parliament and Egyptian political leadership to have a complete opening of the museum in 2020.

Have you at least decided which quarter the museum be opened in?

What changed the original plan of having a soft opening first before the complete one?

The opinion was to complete the infrastructure around the museum and to create a connection between the GEM and the Pyramids Plateau, as well as to make use of the Sphinx airport which will open in the near future, which is only half an hour away from the GEM.

The idea was to make use of this new infrastructure in the GEM’s grand opening ceremony. 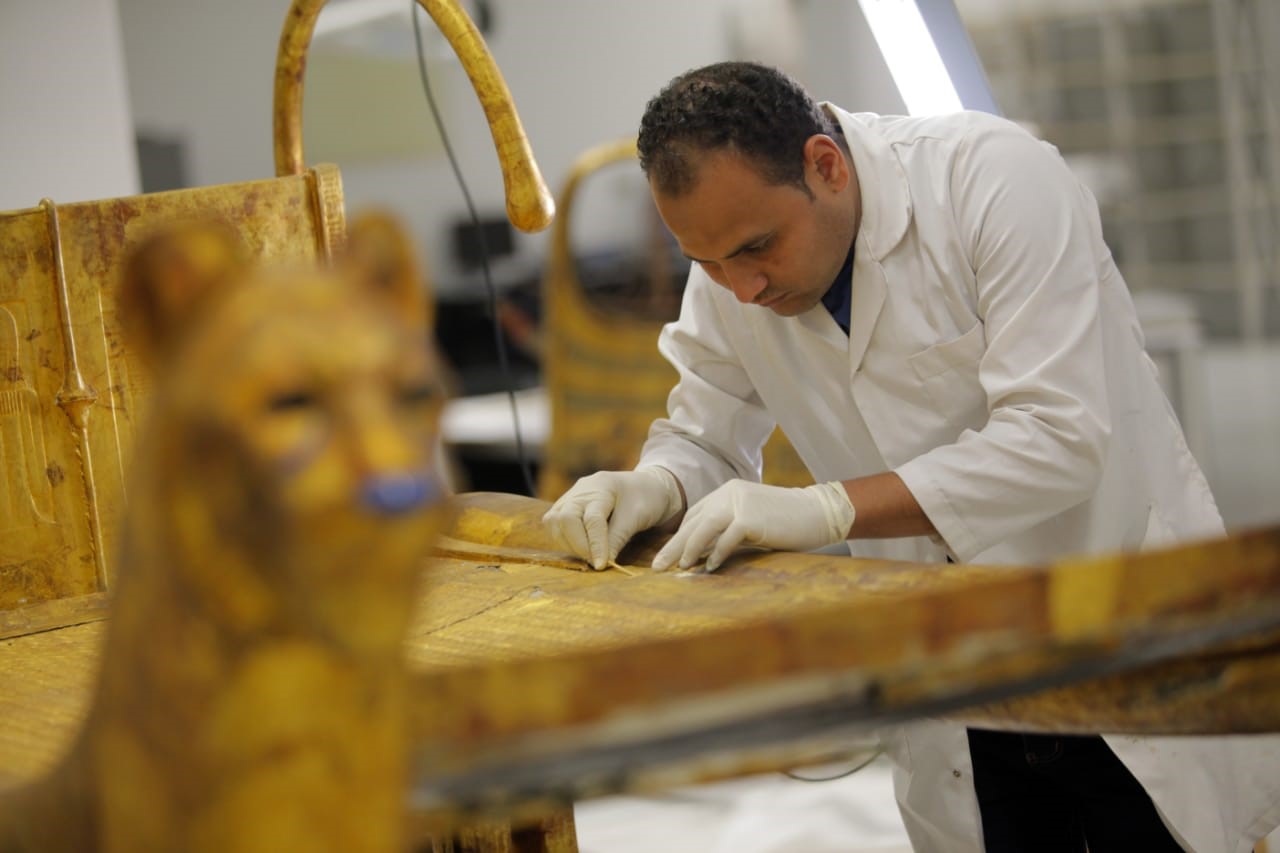 How do you see the GEM’s role in reviving tourism in Egypt?

Even before its grand opening, the GEM started attracting several tourists. We are offering them a chance to get into restoration labs and follow the antiquities’ renovation process for a noticeably higher price than the usual amount of money paid for a museum tour. Nevertheless, this is considered an exclusive look to the pre-opening preparations.

On a larger scale, the country is putting increasing efforts into creating the most suitable atmosphere into attracting the tourists, and with the opening of the Sphinx airport, there will be an increase in the number of tourists coming to Egypt.

How much does the ticket of visiting restoration labs cost? And how is the tourists’ turnout to it?

The turnout can be described as fair. We are only limited with having 50 tourists per-day as only 10 of them can get in together. That is because we need to maintain the quietness of the labs as much as possible for the workers to focus on their work.

People are extremely interested in what is behind the scenes of the museum, and there are complete tourist groups who come specially to visit these labs.

According to the previous plan, the GEM was announced to host 50,000 artefacts by its grand opening date. Will all of them be available and restored by 2020?

Up until this moment, the GEM has received safely more than 45,000 artefacts. Most of them will be on display. So already the museum has worked in the last eight years in moving and restoring the monuments to be displayed.

Other than the total collection of Tutankhamen, what artefacts will be shown for the first time?

They are all the results of excavations that have been done through the past three decades. For instance, they will include the complete burial chamber found in southern Saqqara for a man called ‘Sabi’, who was a high official priest from the reign of the VI dynasty of King Pepi II.

There will also be a whole rare collection that was discovered inside a Mastaba (a type of ancient Egyptian tomb in the form of a flat-roofed, rectangular structure with inward sloping sides, constructed out of mud-bricks) of Ptahshepses in Abusir. There will be many displayed for the first time artefacts that are considered huge discoveries.

Why did you decide to showcase the whole collection of Tutankhamen’s belonging in the GEM?

Since the discovery of Tutankhamen’s tomb in 1922, only about 1,800 from over 5,000 relics that were discovered inside the tomb were on display. So, the decision was taken to display the complete collection in order to give visitors and researchers the chance to know the man behind the golden mask. The comprehensive display of the belonging will take the visitor back in time 3,500 years, to see the oldest and only remaining throne from ancient Egypt and the only remaining royal insignia from ancient Egypt.

That will create a complete unique experience that will provide visitors with something they have never witnessed before.

How many relics were transferred so far to the GEM from the total 5,000? And do you plan to transfer the rest?

Nearly 4,500 monuments of the total collection have been safely transferred into the GEM’s restoration labs, and have received treatment already.

The final few hundred antiquities, which are still on display at the Egyptian Museum in Tahrir Square, will remain there until shortly before the opening of the GEM in order not to deprive the international guests from the golden marvels of the young king.

What is the cost of transferring Tutankhamen’s nearly 4,500 monuments to the GEM?

I cannot give you the exact number. The cost changes on daily basis, but what I can say is that due to having the transferring missions done by Egyptians, the cost is way less than having an international company specialised in transferring relics could have provided us. 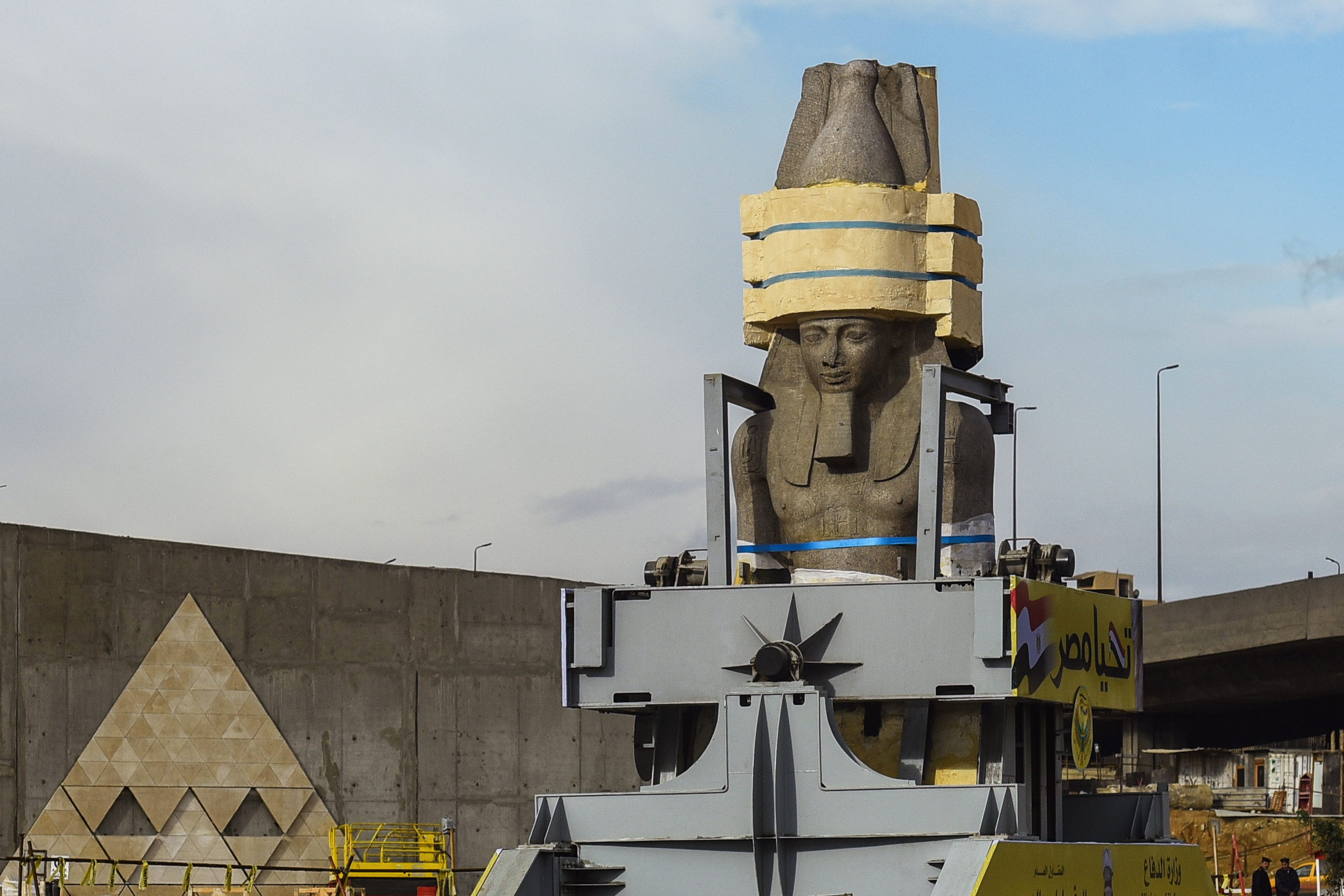 What is the GEM’S 2019 plan regarding the construction of the museum and its international publicity?

The construction works of the museum are due to end by the mid- 2019, and the publicity campaign will start massively once the opening date is determined, and there are several ministries currently working on choosing the appropriate date of the year 2020 to open the museum in order to have it on the international touristic calendar.

Regarding the publicity plan, are there any highlights of the places or events, the ministry aims to market the GEM at?

What I can say is that there will be specialised companies doing the publicity campaign for the GEM.

Is the GEM still in need of funds or grants in order to complete the project?

Egypt is shouldering the project on its own, and has received two loans with a total of $750m from Japan at very good conditions and a long grace period, which is a fine cooperation between the two countries to complete this big cultural heritage project. We consider the financing of the project is secured until its finalisation.

Did the change of the museum’s opening date have an effect on its financial condition?

No it did not. The project is still within its financial frame.

Do you have an estimate of the number of visitors the GEM will host in its opening year?

It is aimed to have between 4-5 million visitors in the first year, which means more than 10,000 per day.

Some of Tutankhamen’s belongings care currently on display at temporary exhibitions roaming Europe. Will these relics be showcased among their peers once they return to Egypt?

Their place is reserved at the GEM. But since there will be 5,000 relics of Tutankhamen’s belongings on display instead of 1,800, we believe they will not be effecting the scenario of display.

Does that mean there is a long-term plan of having this exhibition roaming countries for upcoming years?

No, until now it is not permanent.  There is a programme for this exhibition and then it returns home. Any future exhibitions of showcasing Tutankhamen’s treasures will be leaving from the GEM.

What are the main challenges currently facing the GEM?

One of the main challenges we are facing now is the synchronisation between the construction and the archaeological work, then safely transporting the artefacts into the galleries and putting them in place in order to prepare the museum for display.