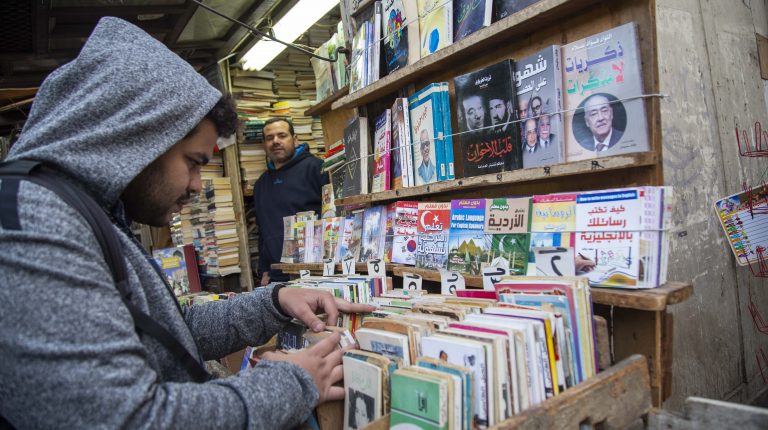 A comparison between two events is never complete without checking each one. At the narrow alleys of Azbakeya independent book fair, hundreds of bookworms gathered to attend the unique book fair that was organised for the first time away from the state-run Cairo International Book Fair (CIBF) held simultaneously.

In the heart of the Attaba neighbourhood, Cairo, the two-passage book fair was overcrowded with people of all ages digging for different books.

For the first time since the launch of the CIBF, the Azbakeya book traders decided to boycott the international event. The 50th edition of CIBF kicked off last Wednesday at its new location in the Egypt International Exhibition Centre, located in the Fifth Settlement. A week earlier, the Azbakeya book fair was launched, grabbing people’s attention.

Daily News Egypt visited both book fairs and talked with visitors about their views and experiences this year.

The books offered in Azbakeya book fair at low prices usually below EGP 50 per book can be very attractive, however, roaming the jam-packed event was not as attractive.

“We wanted to participate in the 50th Cairo International Book Fair. We are very aware that the place here is small. Nonetheless, after eliminating us [from the CIBF], launching our own independent book fair was our only solution to keep our bookstores running,” Heba Karam, one of the Azbakeya book fair’s organisers, told Daily News Egypt.

Karam explained that Azbakeya book traders usually prepare for the CIBF a few months before its start, through purchasing thousands of new and old books.

“We were usually given a spacious area in the CIBF which allows us to double the amount of books we can showcase in our regular bookstores,” she said.

The CIBF used to allocate 1,000 sqm to Azbakeya’s 108 book traders, allowing all of them to display thousands of books.

“Many of us borrow money to purchase books before the CIBF and repay our debts from the profits we make from selling these books which also covers our annual expenditures,” Karam added.

This year, the Azbakeya book traders were informed a month before the CIBF that the General Egyptian Book Organisation (GEBO) will allocate an area enough for only 30 bookstores, “which means abandoning other book traders.”

Most of the books offered at the Azbakeya bookstores are either second-hand or old yet valuable. These books cannot be found elsewhere because large publishing houses only sell new books.

Crowdedness is the main struggle people face while roaming in the Azbakeya fair. However, this did not prevent people from visiting the book fair.

Hossam Ahmed, 22, found that spending a day at the crowded narrow-alley fair can be handled for the sake of having dozens of extra discounted books which he cannot find elsewhere.

“I wait for the book fair [CIBF] the whole year, just to visit the Azbakeya pavilion. Shopping with a low budget requires me to look for the books I need at the least possible price. When I read about the elimination of the Azbakeya book traders from the CIBF and their decision to organise an independent fair, I made my mind to attend here no matter what,” he said.

According to Ahmed, his budget allowed him to buy dozens of books which he would not get from the 50th CIBF.

On the contrary, Mohammed El-Said, 27, found that the Azbakeya book fair is a total failure.

“It is extremely cramped and congested to the extent of not being able to search for the books you need even if you tried. The place has authentic books but being constantly hit by people passing-by prevents you from thinking of anything but leaving, depriving you from the book shopping’s main joy: exploring new books,” he explained.

From El-Said’s point of view, most of the books he found at the Azbakeya book fair can be found online or can be replaced by newer versions.

“The scientific books I found were timeworn, several improved versions were published after them. So even if a person is looking for a scientific source, he can find recent versions,” he added.

Despite a string of controversy before its start for the relocation of its place, the 50th CIBF exceeded many people’s expectations when it came to its organisation, services, and wide place.

And also, despite its considerably very distant location for most people, with very few available public transportation, the CIBF succeeded in attracting hundreds of thousands of visitors within a few days since it has opened its doors.

The ministry of culture announced that the General Authority for Cultural Palaces has already sold its 10,000 displayed books. The Minister of Culture, Inas Abdel Dayem stated that, so far, the turnout of the book fair is extraordinary.

Regardless of the huge number of visitors, the spacious location of the Egypt International Exhibition Centre was wide enough to absorb them all, without causing any jams. With several entrance doors and tickets windows, long queues disappeared.

The main issues previously experienced at the old location of the CIBF were solved. Unlike prior years, visitors are offered decent, clean bathrooms to use, and neat areas to rest at.

“Decency and beauty are the two words that can describe my experience at the CIBF. It’s my first time to visit it, but definitely not the last,” said 30-year-old Hamsa Ragab.

“Taking my three kids there, I never expected they would be that happy and excited with all the available activities there. It is not only a visit to purchase books, it is more of a place to hang out with my kids while doing activities suitable for both of us, and teaching them about the importance of reading,” she explained.

Regarding the distant location, many asserted that with the buses allocated by the ministry of culture and normal public transportation, the Egypt International Exhibition Centre was reachable.

“It took me only 20 minutes longer than the regular journey to the old location. Yet, no one can deny that the place here is a way better than the previous one,” 18-year-old Ahmed said.

The golden jubilee of CIBF runs until 5 February. The fair opens its doors to visitors from 10am to 8pm, with the support of 580 volunteers from public universities.

The fair provides 723 exhibition halls for a total 1,274 exhibitors. The new venue was built on an area of 24.000 sqm, of which a large area was dedicated to low-price books up to EGP 10.

It also hosts 130 cultural events for both children and adults, including concerts, ballet performances, and poetry nights.